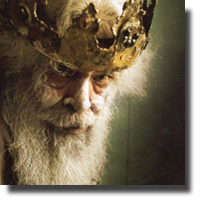 Jack Charles versus The Crown is not, despite the show’s title, a court room drama. Canadians may not know much about Jack Charles, but his story is all too familiar. It’s an autobiographical chronicle of the salvation and personal redemption of an Aboriginal Australian who has spent too much time in gaol and too many years suffering from substance abuse.

While there are moments of sadness, this is not a depressing story, nor is it indulgent – at least not the way Jack himself tells it. He is now in his early seventies, but looks older (it’s his grizzled features that are seen on the cover of this year’s PuSh Festival brochure). The aboriginal actor is taking his story to new audiences far away from his homeland. Ironically, the distance between when and where events took place and the here and now makes Jack’s story easier to bear.

The show starts with Charles stepping onto the stage and heading towards a potter’s wheel. His focus is on the work-piece while a video of his (extensive) rap sheet rolls over an irregular back wall. It is ten minutes before he utters a single word to the audience. When he does, it’s in a thick Australian accent, but his voice is strong and kind of mellifluous.

Born to Blanche Charles, along with twelve other siblings he never got to know, he was removed from his mother’s care at around one-year-old. He eventually wound up, his first place of any real belonging, at the Box Hill Boys’ Home. At fourteen, he started an apprenticeship and was placed in foster care. That was until his foster ‘mother’ ratted him out the authorities, and then was sent to gaol for the first time. Jack has accepted his lot in life with remarkable resilience. He cofounded Australia’s first-ever indigenous theatre group and went on to work in film.

Charles’ intriguing story-telling is intermixed with live music from Mal Beveridge, Nigel Maclean and Phil Collings in an onstage band playing incidental music and occasionally back up for Charles’ whimsical singing. He surprised me, and likely most of the audience with his tuneful rendition of the traditional folk song “Black Girl.”

Charles completed his performance with an inspired contrivance. In a faux court scene, he proposes a cogent argument to the audience to expunge his criminal record along with his “Classification Record Number.” The audience unanimously signaled an amnesty with a standing ovation.

Jack Charles comes across as been totally down to earth. If he harbours any resentment about the indignities he’s experienced, he doesn’t show it in his performance.