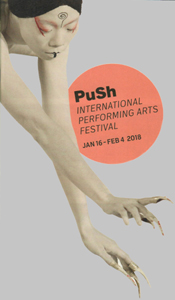 Dublin Oldschool is a relatively new play, or perhaps more accurately a unique theatre piece, by young Irish playwright Emmet Kirwan, and presented by The Cultch in association with the PuSh International Festival.

Two separate microphones stand on a bare, black stage roughly ten feet apart waiting for Kirwan and his co-star Ian Lloyd Anderson to arrive on stage to scream, shout, swear (profanities) and swagger their way through Kirwan's rapid-fire, gut-wrenching dialogue. When the pair began their performance with a duel rap in the Irish vernacular, I feared the worst. I needn’t have worried. Kirwan and his buddy Anderson have such a good understanding on stage that it seems perfectly plausible that they play headbanger brothers.

For the most part, Kirwan is Jason, a wanna-be house DJ who just can’t say no any drug-fuelled party. Anderson is Daniel, who denies being homeless just because he is living on the streets. Though it’s never revealed in detail, Daniel at one time had a prospective academic career (though obviously not as an English teacher), but has now settled for life as a heroin addict.

As the title suggests, the play is set in Dublin’s rough equivalent to Vancouver Downtown East Side over a typical weekend. As the writer of record, Kirwan himself takes on the responsibility of the majority of the dialogue which is delivered in various forms including: slam poetry, rap, trash-talk and a few doses of gratuitous pseudo-philosophy.

Ian Lloyd Anderson, on the other hand, is more the actor who takes on a multiplicity of characters (male and female) beyond that of brother Daniel. It’s his performance that exacts the mutual belligerence and sibling resentment in their relationship, but also the strained, unspoken affection that is typical for Irish close relatives.

Dublin Oldschool is a coming-of-age tale – of sorts. Emmet Kirwan’s character has reached a ‘fork in the proverbial road’ and is about to take it. While his writing is fiercely acerbic, it has an audacious quality that Vancouver audiences can relate to.