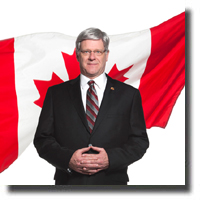 Steven Harper must have seen or read this play because after it opened in 2012 in Toronto, and had had successful runs all over the country, he said he was proud to be Canadian when he addressed the British Parliament in 2013. But before Healey wrote this play, when asked if he was proud to be Canadian, he didn't answer yes or no, but instead gave the political spin answering that Canada was rich in natural resources.

Award-winning playwright Healey's play has gotten positive reviews from its production in Newfoundland all the way to Vancouver. It's a satire, but Healey doesn't present the Prime Minister (Andrew Wheeler) as a cartoon character, except for a few times, showing his deadpan humour and his nerdiness. But most of the time, he is pictured as a man who wants to improve Canada's economy and make Canadians happy. After all, Harper studied Economics, and many of his dialogues in this play show his expertise in this field.

Healey combines facts from Harper's speeches and comments to that of fiction. The fictitious part comes in the personnages of a rookie MP —Jisbella Lyth (Emmelia Gordon), a single mother with a limited understanding of her role as an MP, and her son who is seen being interviewed in a CBC programme 20 years later as he runs as an Independent MP against the Conservatives still led in this fictitious future by Harper.

From a production point of view, the 90-minute no intermission play was superbly acted by Wheeler, Gordon, Kyle Jespersen, his chief-of-staff, and Daniel Doheny, Lyth's son. Donna Spencer directed this last year and again this year, as we prepare for the upcoming federal elections.