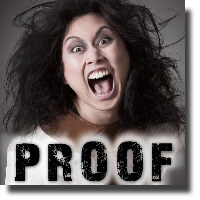 Through David Auburn’s simply titled two act play, director Raugi Yu, with help from an all Asian cast, steers the audience through a maze of complex family relationships and the close proximity of intellectual excellence to insanity. But Proof is much more than an account of the narrow boundary between genius and neurosis.

Robert, affectingly played by Jim Preston, is a once brilliant Chicago University mathematics professor who suffered a nervous breakdown and has been in gradual decline ever since. Catherine (Josette Jorge), his gifted, though fragile daughter has sacrificed a college maths place to look after her father over the four years of mental disintegration.

In the opening scene we see Robert and Catherine on the back patio of their Chicago home in a pleasant father-daughter conversation. Ten minutes into the play, we realise that Catherine isn’t actually talking to her father, but her father’s ghost. It’s a situation that might suggest she is spiralling towards a similar fate to her father. A suspicion advanced by Catherine imagining the bottle of champagne on the patio table that she drinks alone is a birthday gift from her deceased father.

Robert had died a week earlier and Catherine finds herself on the evening before the funeral, ruminating on her own twenty-fifth birthday (a funeral and a birthday on the same day seems an odd concomitance). Meanwhile, Hal (Minh Ly), a former student of Robert and a self-confessed admirer is rummaging through the professor’s old notebooks. However, his admiration for Catherine would seem to be even more ardent.

Ms Jorge is a tour de force as the play’s main protagonist. Present on stage for almost the entire performance, she shows a full gambit of emotion ranging from sarcastic alienation towards Claire, her elder, shallow sister and sullen self-absorption to the hyper intensity of someone living on the edge.

Andrea Yu (hopefully, no relation to the director) turns in a convincing reading of Catherine’s less self-aware sister Claire. Less believable is Minh Ly as Hal. Ly does well in the play’s lighter moments, but fails to handle the more serious scenes with the same confidence.

Shizuka Kai’s cleverly constructed set of an all-wood patio serves the production well. The wooden rail is conveniently broken, permitting the audience an unobstructed view of the actors. An intriguing feature is the window that also serves as a video portal. However, the set’s footprint makes the small stage even smaller.

Raugi Yu maintains an even pace throughout. He wisely plays down the academic element, opting to focus on the emotional aspects. However, while Auburn’s play only uses mathematics as a metaphor, the writing is too often by the numbers.