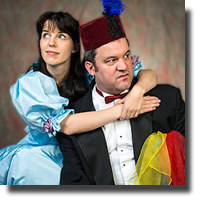 In The Prince’s Play, lechery, lewdness, and lasciviousness are the prince’s stock in trade. The songs are ribald and lusty; courtiers carouse for frivolous fun or mean-spirited revenge, as the case may be; and the main character, Scotty Scott, is a fawning court jester who becomes the unexpected victim of his own vengeful spite in a grim twist of poetic justice.

The Prince of Wales is out for yet another in a seemingly endless parade of female conquests. He becomes infatuated with his jester’s daughter. Scotty Scott is enraged after he discovers the prince has deflowered his only daughter, and he finds a local cutthroat to dispatch the royal heir. The would-be-assassin’s accomplice is his sister. She ensnares the prince in yet another tryst and becomes so smitten with him that she attempts to talk her brother out of the murder. This is when things begin to go horribly wrong for Scotty Scott.

A famous playwright once wrote that “the abuse of greatness is when it disjoins remorse from power.” The prince in this play bears this out, but the greatest source of tragedy during the course of its rather simplistic and unbelievable plot stems from the failure of innocence (in the form of the jester’s daughter) to see such a lack of remorse for what it really is—loathsome and repugnant.

James Gill is a tour de force as the hunch-backed jester. His Scotty Scott is florid, effulgent, and indefatigable. If his dramatic monologues at times seem interminable, it is in part because all of the other characters on stage at the time are locked into a trance, as if mesmerized by his loquacity.

Although writer Tony Harrison’s rhyming couplets occasionally devolve into cheesiness, they are also occasionally pithy, trenchant and intense. The challenge for actors is to deliver the dramatic force of the dialogue while avoiding the sing-song cheesiness so endemic to the rhymed couplet form. Unfortunately, this pitfall of Harrison’s adaptation is not easy to avoid, and many couplets come off sounding more than a little bit contrived, leaving this reviewer feeling a rather nauseating sense of bathos, rather than any emotionally-satisfying pathos, far more often than ought to have been the case.

Aside from some memorable and distinctive minor parts—such as John Harris’s incendiary, prophetic, ire-ridden Kintyre and Helen Martin’s sensually tantalizing Magdalena—James Gill’s bombastic performance virtually eclipses all the others. Edward Foy is perhaps worth mentioning: His contribution goes a long way towards affirming that not all who act as nobility are to the ‘manner’ (sic.) born or bred.

Lara Tansey merits special acknowledgement for her exquisite costume coordination. All actors looked as if they had stepped straight out of a day in the life of upper class Victorian England. It is a pity that the language of the play does not manage on a sustained basis to be either as decorous or as ornate.