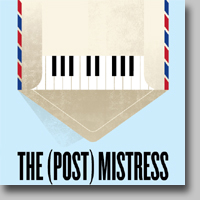 The (Post) Mistress is a brilliant performance by a cabaret-style artist who plays an array of personalities with ease and charisma.  With a script by revered playwright Tomson Highway, this uniquely Canadian musical is exciting and full of surprises.

The play takes place in the the fictional Northern Ontario town of Lovely.  The audience is intrigued even before the performance starts.  They sit around the stage that has a beautiful set of cream-coloured, red-trimmed round tables, a desk and a board with the famous postmark of the Canadian Post Office.  The screen in the background changes appropriately to reflect the emotions of the characters that are portrayed.

The play has so many concepts and emotions all rolled into one play that its hard to believe that the audience experiences joy, sorrow, love, excitement, neglect and exciting dreams all through the performance of one skilful artist with a brilliant memory and a talent for languages.  Three Languages-- Cree, French and English are spoken and Patricia Cano (the artist) moves from one to the other with the fluency of a native speaker.  The words spoken in Cree however, were not understood.  Being so focussed on the dancer and listening hard to the Cree words, I only noticed a translation on the far board much later.  This part of the play seemed a little too long and monotonous.  Somehow, I was hoping for someone to break the monotony by coming to pick up his mail!

The rest of the play was fascinating.  The second act after the intermission kept the audience participating and 'dancing' with their emotions-- laughing, terrified and utterly surprised at the end.  Amazingly, the Post Mistress, Patricia Cano was as light as an angel as she skipped, jumped and danced whether it was the Argentine Tango or in fury, as she stabbed a lover.  The dramatic ending of the last scene will leave the viewer in awe of the heavens.

The saxophone and clarinet player (Bill Runge) was great entering with gusto or soft cadence at the right moments and the piano player-- Bill Sample—was magnificent.  He kept the whole play as a melody of Life, a unifying factor that framed all these human happenings as a wistful song.

Kudos to the Director John Cooper and the Stage Manager, Pamela Jakobs and to Ted Roberts( Set, Lighting and Video Director) for putting together an unusual but soul-inspiring celebration of the human spirit through story, music and dance.