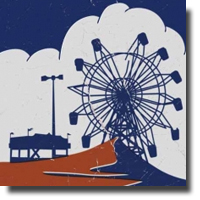 Playland is Athol Fugard’s single act, two-handed play, set in rural South Africa on New Year's Eve 1989. Fugard brings together two characters that have lived their entire lives on opposite sides of the apartheid equation. Gideon Le Roux is a recently discharged Afrikaans soldier who has spent too much time fighting a guerrilla war against SWAPO (South West Africa People's Organization) in Namibia. He is visiting an amusement park alone to celebrate the last evening of a year of which he is thankful to see end. Martinus Zulu is a black marginally educated night-watchman, who is never separated from his knobkierrie, which he carries around everywhere he goes.

It was a critical time in South Africa’s storied history; just weeks away from Nelson Mandela’s landmark release from Robben Island on 11 February 1990 and the government’s system of racial segregation was already starting to crumble. The two men are not only divided by race, but also by ethical standards and spirituality. However, it soon becomes clear that they share more common ground that either cares to admit. Both are guilty of killing their ‘fellow-man’ – though for different reasons, in entirely different circumstances. In Gideon’s case, he shot down innumerable insurgents under orders. He didn’t know who they were, and cared even less. Martinus on the other hand exacted retribution from his former girlfriend’s employer, who had sexually assaulted her. He has a moral sense of his act being wrong, but is unable to summon any feeling of contrition.

In the pair’s exchanges that begin with verbal sparring, then rapidly transcend to goading and conflict, before ending in uneasy reconciliation, they become a microcosm of their country’s own struggle. The stoic Martinus knows that things are about to change, but realizes that it will not likely benefit him. Gideon’s outward show of belligerence belies his own self-loathing.

Performances by both actors along with the show's production values are of a high standard. Michael Kopsa as agent provocateur, Gideon Le Roux is exceptional. His time spent mastering the Afrikaans accent and colourful use of South African slang really shows. Frequent actor on the Pacific Theatre stage Tom Pickett gives a physical and carefully nuanced performance as Martinus, but relies more on his southern (US) accent.

Set designer Drew Facey might have blown the entire production budget on his stunning representation of a run-down fairground. An estimated cubic yard of smooth gravel was trucked in to cover the entire stage floor. Other props, such as the disused section of roller coaster surrounded by empty beer cases gives a war-weary visual to the play. Perhaps due to the extravagantly constructed set, there was nothing left over for wardrobe. South Africans, particularly indigenous Africans take pride in their appearance, but the actors tended to look positively slovenly.

Athol Fugard’s first post-apartheid play is a thought-provoking story of redemption that should be of interest to anyone fascinated by politics, history and the continuum of humanity.