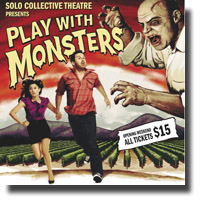 The stage design in black and white was a good choice for this simple, funny and warm production. For a rainy Sunday evening, there was a good audience turnout.

Drew (Andrew McNee) is a man in his forties who has difficulty finding his niche in life. He narrates the play and takes us back and forth to events in his life and his struggle with living up to his parents’ expectations. His background is one of falling off the straight and narrow resulting in doing time for car theft.

His mother wears a fur coat and smokes cigarettes non-stop and his father serves fine wines. Drew’s parents constantly worry about his future and nag him relentlessly. His mother (Karin Konoval) and father (Bill Dow) have been married many years and truly love each other but Drew’s mother eventually leaves her husband for another man.

Heartbroken after having lost his wife, father and son, leave together on a vacation to a vineyard in France. There they both meet love interests. Drew meets the love of his life Lily.

The parents eventually pass away and come back as zombies. They continue to haunt Drew about making something of his life. Drew’s father was a waiter when he was alive and as a zombie, was quite funny trying to pour wine with his stiff arms. Lily (Josette Jorge) broke out in song that took the audience by surprise for she did it with great humour and flare.

Another scene that got a few laughs was when father zombie carries mother zombie like an ironing board under his arm and leaves the stage.

Though there were some humorous moments like the appearance of a ninja running across the stage, the storyline did not have enough substance for these actors to sink their teeth into. I found the play slow at times. A great line by Drew towards the end of the play was “A cannibal is a guy who walks into a bar and orders a waiter.”