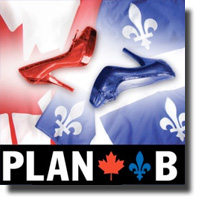 If this was Plan B, what the heck happened to Plan A? Plan B, much the same as with its pharmaceutical namesake is brought into effect when the primary process is either abandoned, has failed, or just neglected. Michael Healy’s bilingual political satire uses the volatile relationship between Quebec and Canada as a metaphor to examine intimate personal relationships. In Plan B we see how issues such as language, identity, culture and individual experience can all play a huge part in how partnerships might (or in this case, might not) work.

Set in a hotel in Hull, after a questionable victory by pro-separatists forces by virtue of a vaguely worded referendum question (does this scenario seem familiar?), four government representatives are called to together to hammer out negotiations that would clear the way for Quebec to leave confederation. The four characters involved in discussion: Lise Frechette, Quebec’s Intergovernmental Affairs Mininster, Mathieu LaPointe, Premier of Quebec, Colin Paterson, a Senator from Saskatchewan and Michael Fraser, Federal Finance Minister are an improbable combination of personnel in reality, but the group made for an intriguing theatrical dynamic.

The author gives each character both a personal and political agenda that is seen to be in direct conflict with the other three. The attraction that Michael (Adam Henderson) has for Lise (France Perras) starts off as a hopeful dalliance, but progresses towards a deeper relationship, works as a catalyst for redefining the course of the debate – the introduction of a “Plan B.”

Adam Henderson gives a quirky, naked (artistically, not physically) performance as Michael who must carry the burden of imparting much of the play’s redundant dialogue. France Perras’s Lise is arguably the most appealing character and the only one that doesn’t come off as a caricature. Of the two smaller roles, Howard Siegel is outstanding as the maverick, fustian Senator. He almost steals the show when taking over as de facto leader informing Michael “You are hereby relieved of the burden of thinking.” Jacques Lalonde is the least engaging of the foursome as the (mostly) self-restrained Mathieu LaPointe. One would have supposed that a Quebec Premier might have been given to a little more bombast in this situation.

Lynda and Gary Chu’s simply designed and well constructed set is split between a boardroom and Michael’s hotel room takes advantage of every square inch of the small stage. The crossed-flags displaying the fleur-de-lisé and the maple leaf is a nice touch but the location of the translation screen at left of stage draws focus away from the actors.

Graham Ockley’s lighting, designed in concert with Dorothy Dittrich’s sound, provides natural cues for the actors as well as reinforcing the sense of time and place. Featured songs by Canadian band The Tragically Hip dovetailed perfectly with script.

Despite a degree of wasteful verbiage, Plan B is entertaining and thought-provoking. Perhaps the most foreboding aspect of the play is that the political component may not be too far removed from potential reality.