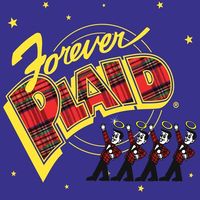 What a delightful show! The theatre was jampacked in last matinee's performance because of two busloads of seniors from Coquitlam who laughed and sang along with the actors that iconic Calypso song popularized by Harry Belafonte, "Matilda".

But it was a trip down memory lane as we seniors reminisced with songs from the fifties and sixties"Sh Boom", "Shangri-La", "She Loves You", Rags to Riches, "Perfidia" and many more. The Plaids composed of Smudge (Bradley Dewar), Sparky (Allen Fraser), Jinx (Christopher Hall) and Francis (Dann Wilhelm) sang in the style of those quartets of yore-- the Ames Brothers, The Four Aces,The Four Lads and others.

This is one of off-Broadway’s most popular and successful musicals, which first opened in November 1989 at Steve McGraw's in New York City, and it's been showing all over North America until today.

Kudos to director Wayne Nolan for an excellent show. Accolades to the musical accompaniment, Juli Atchison (Pianist) and Parker Elkins (Bass). The last song brought back memories of that film with William Holden and Jennifer Jones, "Love Is a Many Splendored Thing" which was sung beautifully by these four "plaids."