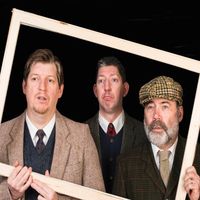 In art as in life, nuance reigns to reveal much more than the subtleties of meaning can ever hope to conceal, and the United Players’ presentation of Lee Hall’s The Pitman Painters not only proves that point, but it also liberates the imagination in as provocative and illuminating a manner as one could wish for within the space of three short hours. If the time passes quickly while this play is being enacted, it is because its lively banter about paintings and the men who make them is not even the slightest bit like watching paint dry. Indeed, there is, in this play, a freshness and a charm that invites and educates without either being ingratiating nor condescendingly pedantic. As it explores the relationship that art and life have with each other, it teaches what some contend cannot be taught—understanding.

Lee Hall’s dialogue is sharp, clever and thought-provoking throughout; Jessica Oostergo’s austere set is stark minimalism, writ large; and scene-by-scene transitions blend seamlessly as actors move set pieces while the audience moves mental furniture, conceptually speaking, all of which is immeasurably enhanced by Graham Ockley’s sure-footed lighting changes. Director Jack Paterson rings the conversational changes with a sure hand on pacing and the tempo never lags, no matter how often and in however many forms the light dawns. The only criticism that one could fairly level at playwright Lee Hall is that, aside from some good-natured bickering and a few scenes centered upon one character’s internal conflict, there is relatively little in the way of significant conflict to move this play forward. Lots of thought, but not a lot of action; the kettle boils, but it’s a cerebral kind of steam.

This play, set in England between 1934 and 1947, will appeal to many people, but at its core it is for those who love art; it is for those who long for a stronger connection between the world of art and the working classes; and it is for those who puzzle over the relationship between the meaning of art and the art of meaning. It is allusive and engaging, drawing upon references to and commentary upon the great works of art from workers as diverse as Titian, Van Gogh, and Picasso (which are projected upon the one wall at the back of a spare set consisting of a few chairs and a single table). Never does it devolve into a preachy, proscriptive interpretation of the various artworks under scrutiny.
Essentially, this is the story about a group of unassuming, but opinionated English coal miners who develop their understanding of art through the unorthodox tutelage of a university professor who is hired to teach them art appreciation. After traditional instruction fails, the professor challenges them to try doing their own paintings. What follows is a series of animated conversations about art, the meaning of art and myriad subtle variations on related themes. Wit, humour, wisdom and aesthetics intersect wonderfully within this cleverly constructed and impressively enacted production.

Along the way, as their artwork begins to gain popularity and acceptance in the art world, one of the more promising miners, Oliver Kilbourn – played with sensitivity and understated intelligence by Paul Herbert – finds himself faced with the offer of a stipend on the condition that he leave the mines and take up full-time painting. Kilbourn’s conversations with his mates about whether or not to take Helen Sutherland’s (Alexis Quednau) offer bring the worlds of art and labour into high relief, while exploring the subtle connections among anxiety of influence, the means of production and the production of means. His final decision is as telling and compelling as it is surprising.

It is intriguing to see the ways that these miners respond to the influence of the many great artists, whose visionary works are projected on the wall at the back of the stage at various moments throughout the performance. It is also interesting to see the rather amusing role reversal that takes place between Oliver Kilbourn (Paul Herbert) and Professor Robert Lyon (Michael Wild) from beginning to the end of the play.

Stephanie Dyck, who was “thrilled to add some much needed estrogen to this production,” injects much more than a merely feminine mystique to this play. If Ms. Dyck is the counterpoint to the gruff miner’s veneer, it is Alexis Quednau’s turn as Helen Sutherland, the art connoisseur who discovers the Pitman painters, which brings a smart, savvy, sensitive and discerningly artistic sensibility to the production. She manages be a patron without the slightest hint of a patronizing air, genuinely concerned only to improve and enhance the capacity for artistic creativity among the Pitmen painters.

Two standouts in this production of The Pitman Painters are James Gill as Harry Wilson and John Prowse as Jimmy Floyd. Mr. Gill puts a sociable face on Socialism, and Mr. Prowse proves with his inimitable charm that a vestigial Victorian morality is no match for the anxiety of influence provided by the nude model Susan Parks, played with fine form by Stephanie Dyck. The naked truth about The Pitman Painters is that Jack Paterson has done an admirable job of directing a strong cast in a production that is sure to be remembered for its vitality, evanescence and robust depth long after the paint is dry on its scenic theatrical canvass.