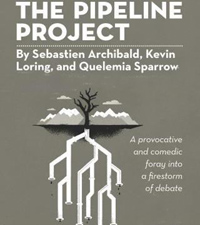 Pipelines that carry dangerous materials are always going to be controversial. Recently, newly elected President Donald Trump reversed a decision by his predecessor and approved both the Keystone XL and North Dakota Access pipelines. In Canada, the Liberal government gave the green light to the Trans Mountain pipeline from Edmonton to an export terminal in Burnaby. Thankfully, they have rejected the Enbridge Northern Gateway project, which would have twined pipelines stretching from Alberta to Kitimat.

Contentious pipelines and what causes them to be such a passionate issue is the focal point of The Pipeline Project, a new Canadian play by Sebastien Archibald, Kevin Loring and Quelemia Sparrow. It might have been more appropriately titled “The Anti-pipeline Project,” since it essentially provides an unashamedly biased account of the ongoing political battles over pipelines in general and the Trans Mountain pipeline in particular. Within this focus, issues such as: First Nations land claims, climate change and the oil and gas industry are all explored.

The Pipeline Project as presented by ITSAZOO Productions and Savage Society is less a stage play, but more of a theatrical documentary. The show’s writers, Archibald, Loring and Sparrow also perform in the production, although, they primarily play themselves.

Sheryl and Lekeyten (surnames unknown), two Kwantlen Nation elders started things off with unscripted remarks in appreciation of the creative team, followed by a moving rendition of the “Kwantlen Honour Song.”

The first act (roughly 75 minutes long) closely follows a conventional enactment with the added dimension of multi-media and audience seated on all four sides of the stage. The three actors interact with each other and as solo performers speaking directly to the audience. Each of the actors brings something different to the dramaturgy.

Quelemia Sparrow, a First Nations actor, represents her people’s basic ideology that “The Land” holds more significance than money. She is fundamentally opposed to commercial use of tribally owned lands. She challenges oil companies by asking “why would you build a pipeline on land you don’t own.” Kevin Loring drives a gas-guzzling SUV. He earnestly attempts to reconcile the opposing forces of consumption and protecting the environment. Sebastien Archibald confesses to being “white, male and privileged” but compensates for his lack community spirit by riding his bicycle whenever he can.

The actors provide some pretty damning evidence against the construction by enacting the 2010 Kalamazoo River oil spill. A pipeline carrying diluted bitumen operated by Enbridge Energy burst and flowed into the Kalamazoo River resulting in one of the largest inland oil spills in U.S. history. Enbridge executives didn’t hear of the incident until 18 hours after the first alarm.

The second act is devoted to an open forum discussion moderated by director Chelsea Haberlin and included the writers, audience and a guest speaker. On opening night it was the turn of American journalist Linda Solomon-Wood. Ms. Solomon-Wood is editor-in-chief of the National Observer and CEO of Observer Media Group. Assisted by Jenny Uechi (also in attendance) she has directed her investigative reporting skills towards the environment and other social issues.

Lauchlin Johnston’s set design offers some interesting features that help consolidate the show’s central theme. All interior walls are shrouded in black plastic sheets that appear to reflect an oily sheen. A vertically mounted projector displays looped videos onto a circular screen set down on the stage floor that represents the “circle of life.”

Lekeyten, one of the First Nations invitees has learnt the art of talking when there is nothing left to say. His lengthy diatribe at the end of the Talk Forward with patrons heading for the exit could have been truncated to a couple of minutes or even eliminated altogether.

The Pipeline Project doesn’t see as its mandate to offer a balanced perspective. Nonetheless, while its content is flagrantly political it does provide some thought provoking insight into a complex issue.