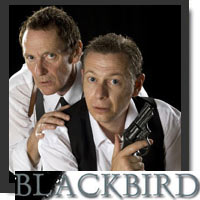 The six sketches include: Trouble in the Works, Last to Go, The Interview, The Black and White, Applicant and Victoria Station.

Ingram’s deliberate overplaying in the opening sketch Trouble in the Works, playing off Webb’s deadpan delivery sets the tone for the entire evening. The scenario, where a shop steward (Webb) must inform the manager (Ingram) of an engineering components factory of the workers grievances against the company’s product line is Pinter’s absurdist drama at its best.

This is followed by Last to Go, an odd disjointed and repetitive conversation between a newspaper vendor (Webb) and a tea stand operator (Ingram) – it’s an excellent example of Pinter’s famous cryptic small-talk.

Less convincing though, is The Black and White in which a pair of delusional bag ladies in a ‘greasy spoon’ engages in aimless discussion over bus routes.

The first act ends with arguably the most complex of the half dozen sketches. In Victoria Station, comedy turns to something more menacing when a seemingly inept cab driver (Webb) plays mind games with his dispatcher (Ingram).

The second act is entirely given over to The Dumb Waiter. Just slightly shorter than the original, the action takes place in real time. Gus and Ben are a couple of professional hit men, holed-up in a squalid, windowless, basement in a former restaurant, complete with a clattering dumbwaiter (a smaller version of an elevator, essentially used for transporting food from the kitchen to the dining area).

Waiting for the identity of their next target, the tension between the two men builds, and it’s in the way that each of them deals with the stress that this tension creates that provides the dynamic within the play. Gus is garrulous and noticeably out of his comfort zone, preferring to indulge in a cup of tea and an Eccles cake. Ben is ruthless and taciturn, who is visibly irritated by his partner’s constant chatter.

Anthony F. Ingram and Simon Webb give riveting performances that work because the characters are believable. At some level, Gus and Ben are two opposite sides of the same coin serving the same higher authority.

John Wright enables the first act to be performed in a “black box” set with actors going through costume changes on stage; this device allows for a natural transition between scenes. For the second act, however, the set is more elaborate, and representative of time and place, heightening a sense of claustrophobia.

The language is delivered in a colourful, south London vernacular and at times may present some difficulty with understanding a few of the uniquely characteristic words. Regardless, no one should have any problem following the plotline.