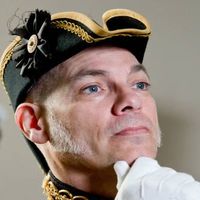 When I see a Gilbert and Sullivan operetta, Iright away think of a panto, but more so, a sophisticated panto. Why is this so? Because perhapsthese two playwrights like poking fun at English society and gives a production like this one made in Canada to poke fun at things social and political in Canada. One such quip was Sir Joseph Porter (James T. Walker) wanting to head the NDP.

There's also the villain. In this case, Dick Deadeye (Clive Ramroop) who wants to spoil everything. And of course the stock characters following in the commedia dell'arte tradition--the young lovers Josephine (Dodi Barillec) and Ralph Rackstraw (Michael Friesen) and the older lovers Captain Corcoran (Paul Beckett) and Buttercup (Breanna Branson). The role of Il Capitano is obviously the braggart Sir Joseph.

And naturally, you've got the surprise ending where we find out someone was mistakenly identified. This is the typical comedy which was copied and re-copied all through dramatic history, from Calderon and Shakespeare, to Moliere and later on, the likes of Gilbert and Sullivan.

I was impressed by the costumes by Linda O'Donovan and Chris Roberts, and the set by Timoth Tucker. The actors were very good singers and dancers. I was likewise impressed by Barillec's singing, especially those high operatic notes which could almost break your eardrums. Friesen was also getting those notes right on the dot. Beckett seemed to have a problem with his range. I got the impression that he was recovering from a cold. Branson did quite well, but perhaps more energy and volume in her singing.

I've always enjoyed the Gilber and Sullivan shows of the Fraser Valley Gilbert and Sullivan Society, and I look forward to seeing moie of their shows in the months to come.