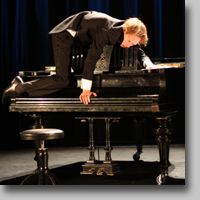 The Cultch
The Pianist: A Concert Catastrophe

The Pianist: A Concert Catastrophe is a wordless physical comedy. Its creator and performer, Thomas Monckton, is wildly inventive and creates many wonderfully creative and hilarious visuals. He is a masterful physical comedian and has the audience captivated from the show’s opening frantic peek backstage to the very end.

The show is great for all ages and languages and is only 55 minutes long. The 7pm start time allows those with kids the opportunity to see a show even on a school night and still leave the theatre before 8pm. There were several kids in the audience the night I attended and they were laughing loudly throughout the performance, particularly at the slapstick. The show would also be perfect for ESL students, international travellers, and anyone really, as there is no language barrier.

The performer and production are fantastically playful, responsive, and interactive. From getting audience members to give him a boost onstage to an ongoing feud with the technicians, Thomas inspires much laughter.

Thomas utilizes every bit of his sparse set- a covered piano, chandelier, and curtains- to great effect. He’s in each moment making discoveries, generally creating a nice unpredictability. Some moments were repeated to diminished effect but, overall, there’s an amazing amount of creativity and inventiveness..

The production uses a great deal of talcum powder. You may wish to get seats further from the stage if you are uncomfortable breathing it in. I was concerned for the performer’s exposure to it every night but was reassured at www.Cancer.org. Apparently store bought talcum powder has been asbestos free since the 1970’s so it isn’t considered a lung cancer risk.

There are not too many shows that all ages and languages can enjoy. This is one of them. If you like to have fun and laugh, come see The Pianist. It is well deserving after selling out at the Edinburgh Fringe.