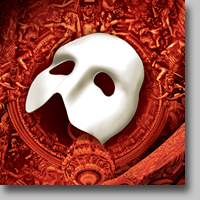 Described as a "spectacular new production", this reinvented staging and scenic design of this new version of PHANTOM performed by a cast and orchestra of 52, makes this musical one of the largest productions on tour in North America. Opening night was indeed a spectacle.

The chandelier in the opening scene plunging abruptly from QET's ceiling, drawing gasps from the audience; the pyrotechnics that felt like the Vancouver fireworks in July; the staircase leading to the subterranean lair, where the steps emerge from the wall one at a time before receding again; the Phantom's disappearing act at the end -- all these indeed constituted a spectacle.

I saw the original production 20 years ago directed by Harold Prince at the Ford Centre for the Performing Arts (now called the Centre for the Performing Arts) and this long-running musical was even then sensational with the magnificent performance of Peter Karrie as the Phantom. In this production's Phantom, we have an African-American, Derrick Davis, the second black actor to play this role. The first one was Norm Lewis in 2014.

Davis was good, but there were problems with the sound of his voice. Basically they were tech problems. Sometimes his voice came out too loud, and other times, the orchestra (augmented by synthesizers and recorded music) occasionally drowned him out as well as the other singers, especially Katie Travis (Christine) and Jordan Craig (Raoul, Vicomte de Chagny)..

These days, it's hard to put a line between opera and Broadway musicals. In fact, Vancouver Opera includes musicals such as Evita and West Side Story in their repertoire. That was what was running through my mind as I was watching this show: it could easily be classified as an opera.

Kudos to Broadway Across Canada for an entertaining show. As I was walking back to the skytrain, I was hearing people singing and humming the theme song "Music of the Night". That's how contagious this composition of Lloyd Webber is.