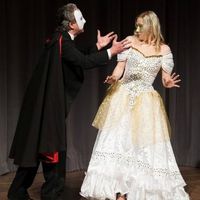 Fraser Valley Gilbert and Sullivan Society
Phantom of the Panto

Unlike the tragic Phantom of the Opera, this panto ends with a happy note. After all, it's the Christmas season, and pantos are supposed to bring cheers to an audience, young and old. And in fact, this panto did bring a lot of laughter and cheers.

Despite the fact that these were amateur performers, FVGSS came up with what appeared to be an almost professional show.I could see see from the performance of these amateur thespians, singers and dancers that there was a lot of work put into this production.

The singing was good, the dancers (T.C. Dickinson, Keira Jang, Lauren Kyle, Jayda Mangat, Carley Miller, Nathaniel Olsson, Harry Pering, Jaimie Reynolds) were wonderful, and the jokes, although meant to be corny, still got laughs from the matinee audience. It was a stormy day and the theatre was half full, but the audience enjoyed the show and enthusiastically booed at Tom Cleevely (the Phantom) and cheered at Jackie Block (Meg Nolia). There's also the other stock character, the "ring leader", so to speak, Jacob Hildebrand (Joe Bouquet DeFleur), who led the audience to cheer out his name whenever he came in. Audience participation is an important element in pantos, and towards the end of the Act II,, everyone in the audience was singing the Muppet song led by James Walker (Andre Jyne),.

I was impressed by the operatic voice of Chelsea Rose Tucker (Christine), but all the other actors, including the lead, Cleevely as well as the chorus, sang very well. Naturally, as in all pantos, there's the man who plays a woman (Jeff Christensen as Carlotta Ferrari) and is purposely out of sync, voicewise, with the rest of the cast. And then there's the hero Raoul played by a female, Joni Hayden-Summerton. These are stock characters in all traditional pantos. What's also common in pantos are the songs that are picked up from all over the place. Nat King Cole's "Unforgettable" was sung, as well as "Defying Gravity" from the long-playing musical Wicked..

I also enjoyed the children playing the rats led by Frannie Warwick (Trappe le Rat) and her brood (Jonathan Burgart, Jessica Chisholm, Analiese Lohr, Eleanor Olsson, Elizabeth Olsson, Nathan Piasecki, Lois Warwick, and Willa Yatsuda). My granddaughter who was my co-critic in this show had these kids autograph her program booklet.