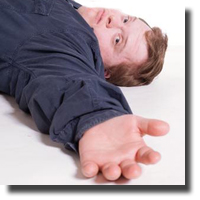 The audience got its first clue in a pre-show broadcast of a conversation between the co-writers that this adaptation was one not likely to have been approved by J. M. Barrie, the originator of Peter Pan. Those of us that filed into the Historic Theatre at The Cultch early were made privy to a pre-recorded brain-storming discussion with Niall McNeil and Marcus Youssef regarding the development of Peter Panties.

Even armed with this advance knowledge, five minutes into the show, I still pondered on whether I was in the right place and if I was, did I want to stay. With the theatre in total darkness, the entire cast loudly marched on the stage and the five-piece band led by Veda Hille perched on a scaffold platform belting out the first song which coupled God and the “F” word, I had to wonder if it could get worse. I decided that the best approach was to just go along for the ride and to my own amazement discovered much that was positive.

Mr. McNeil, who has Down syndrome, is actually the creative force behind this bizarre regurgitated version of the 1904 children’s story that is part improv, part revue and a large slice of absurdist theatre. He has taken all the story’s characters and reshaped their personalities according to his own imagination and for extra measure, thrown into the mix Gil Grissom and Catherine Willows from his (presumably) favourite television show, CSI: Las Vegas.

Director Steven Hill allows the performers to fill in the creative gaps to great effect: Tinkerbell (Tanya Podlozniuk ) is a chain-smoker with a really bad attitude, Peter (James Long) still has issues about growing-up, yet has the look and carnal desire that is very grown-up. Wendy (Sasa Brown) is sullen and introspective winds up getting pregnant with Peter’s baby. Peter Anderson is delightfully Machiavellian as Captain Hook and Adrienne Wong is a perfect foil as his adjuvant sidekick Smee.

Veda Hille and teenage band the Bank Dogs delivered some rapacious music, though not all entirely original. Interpretations of Dylan’s Blowing in the Wind and Pete Townsend’s Who Are You were anomalous, but unmistakable.

Peter Panties is a unique theatrical experience and an all round creative achievement by writers, performers and musicians.