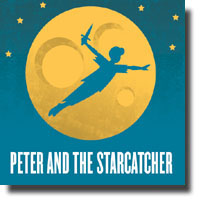 Peter and the Starcatcher by Rick Elice, music by Wayne Barker

Looking through the theatre program of this Artsclub production of Peter and the Starcatcher, nowhere does it list in the cast of characters anyone named Peter or Hook. But for anyone already familiar with Dave Barry and Ridley Pearson’s children’s novel, this would not be too surprising. Rick Elice’s whimsical adaptation contrives a frivolous back-story that takes place when Peter Pan was a nameless orphan and Captain Hook (in this story, Black Stache) still possessed two hands.

Set in England at the end of the nineteenth century, the story follows Molly (Rachel Cairns), the daughter of Lord Astor and an orphan (initially) known only as “Boy” (Benjamin Wardle), as they take a voyage with a motley crew of rapacious seafarers aboard the Neverland. Also taken aboard is a trunk that supposedly contains treasure, but in fact holds the mysterious "starstuff." While on the ship, Molly and Boy along with Prentiss (Katey Hoffman) and Ted (Chirag Naik) become fast friends as they take on Slank (Vincent Tong) and his crew. When the Neverland shipwrecks on an unknown island, it takes all of Molly’s guile, Prentiss’s self-claimed leadership and Boy’s (who has now become Peter) courage to prevent the “starstuff” from falling into the wrong hands.

Director David Mackay allows the show to drift between vaudeville and théâtre de l'absurde. The show sometimes gives the sense of being improvised. Although to be fair, the production requires a lot of movement from the actors that calls for precise co-ordination. The ensemble mermaid routine at the beginning of the second act was a hoot, but lacked precision.

The humour is broad and at times almost puerile, with the sort of 'groaner' puns and malapropistic jokes that just stopped short of annoying. Kudos to the cast though, they put their heart and soul into the performance and saved the show.

In particular, Rachel Cairns brings heroic charm to the role of Molly, while Benjamin Wardle, who has the only serious role in the show, somehow manages to keep focus while mayhem is being scattered around him.

There are lots of planks, ropes and even a pair of jibs on Lauchlin Johnston’s expansive, multi-level set (the stage overlaps the width of the seating area at both ends). Carmen Alatorre’s resourceful costume design fits perfectly with the play’s period setting.

As David Mackay points out in the program, “the Artsclub could not have chosen a more ‘theatrical’ play to open a new theatre.” The newly opened Goldcorp Stage at the BMO Theatre Centre is a 250-seat Studio Theatre close to the Olympic Village. With its flexible seating arrangement, the space can be easily modified to suit various configurations depending on type of show being performed.