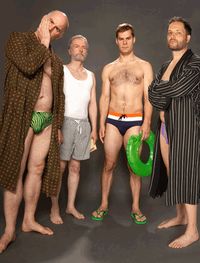 The Cultch and Rumble Theatre
Penelope by Enda Walsh

Based loosely on Homer's epic poem, The Odyssey, Walsh contemporizes the sections of this poem that deal with the suitors vying for Penelope's hand in marriage, in the hope that Odysseus (Ulysses), her husband, who has been away for 20 years because of the Trojan wars and delays in his return to his kingdom in Ithaca, doesn't come back.

Meantime, there ae four suitors left (Sean Devine, Alex Ferguson, Kyle Jespersen, Patrick Keating) desperately trying to win Penelope (Lindsay Winch). The scene is set at the bottom of a drained swimming pool, and faithful to Homer's story-telling, these men are rowdy and messy, taking advantage of Penelope's hospitality, as they are being fed with food and drink during their stay.

As the play progresses, each one courts her in his own fashion. Some of the speeches are poetic, as Walsh tries to conjure the poetic nature of the epic. But for the last courtship presenation by Quinn (Ferguson), the playwright enters into a farcical mode as Quinn does a panto of the history of love, mimicking Romeo and Juliet, Napoleon and Josphine, and others. He almost wins Penelope's heart, until...well, I'm not supposed to tell you the ending. You have to go see the play yourself. But if you've read Homer, then you know what happens to these suitors.

I found the production well done; the acting was superb. I just felt that some of the speeches should have been edited. I found them too long. But, on the other hand, I guess, if we can stand Shakespeare with the long soliloquies, I suppose the speeches by these suitors can be bearable. I believe the playwright was trying to be faithful to how speeches were in those days--speeches that went on and on.

I also liked the last scene where the barbecue pit lit up, symbolizing the return of Odysseus. There was someone there, a stage crew member, as we were filing out, making sure the theatre wouldn't burn down.