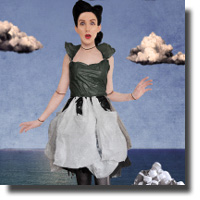 According to the playwright, this one-act play is a " physical fantasy play that’s inspired by the real life Great Pacific Garbage Patch and the effects it’s having on the albatross." In this play, Alby (the albatross, Julia Christina Ray) crashes onto the patch and meets Debra (Nhi Do), a plasticized 1950’s woman and Little Drew (Michelle Vine), a creature she made out of garbage.

A lot of work was put into creating the set. Piles of garbage make up the garbage island where Debra lives. Even some areas of the theatre have garbage strewn all over. For a one-act, I found the play interesting, and the actors did a good job reflecting the message of C

Kostello who has been concerned about the environment around her, as do many environmentalists. Because true enough, there's more and more garbage polluting our planet and something has to be done to stop it. Some solutions like converting garbage into energy is being done, but it hasn't gone full-scale, and that's what we need to do.

Kudos to Kostello and the cast and crew of this production. We need more plays like this to get more people aware of our environment and do something about it.