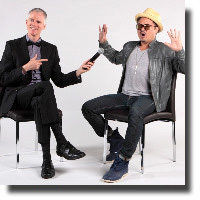 The TheatreSportsTM League gang are back with some new shows and some that aren’t so new. Improvisational comedy needs two components: Quick-on-their-feet performers who aren’t afraid to go too low-brow and an invested, responsive audience.

The season opener last Thursday (18 October) certainly had both those factors plus a very talented sound effects improviser in Laura Skelton. Pants on Fire is a variation on “Truth or Lies” (or is it Fact or Fiction?) parlour game that has someone relating a rather tall story and everyone else has to guess if it’s a lie or the truth.

Compère for the evening, Brian Anderson opened the show by asking the audience if they had ever been lied to by: colleagues, relatives or a significant other. Most people, it seemed suspected that they had been lied to at some point.

Anderson then introduced the players: Diana Frances, Taz Van Rassel, David Milchard, Michael Teigan and Pearce Visser, who would collectively determine whether a guest was telling ‘whoppers’ or spilling out the unvarnished truth.
The guest celebrity who was invited to be the “big fat liar” was none other than Christopher Gaze, who, it turns out spent a night in the late Katharine Hepburn’s penthouse apartment - while Ms. Hepburn was living in it.

Pants on Fire provides an additional twist by having the players take a word-key from Mr. Gaze’s divulgences and perform a five-minute comedy sketch. The device provided opportunities for some hilarious gambits; including a wild excerpt of Taming of the Shrew by Diana Frances and Pearce Visser and David Milchard’s bizarre machination on his addiction to snuff.

The comedy at the Improv Centre may not always be refined, but it’s always fun.