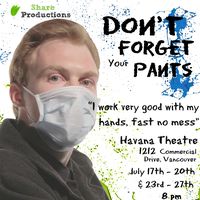 Written by Christiaan Westerveld and directed by James Challis, this dark comedy reflects the society we live in--a society that is absurd, funny, and yet, pitiful. Todd (Artin John), the underdog, is the anti-hero. Rejected by friends, the woman he loves, Natalie (Teagan Mann) fired by his employer, Klive (Greg Radzimowski) for not meeting his sales quota, he ends up with a nervous breakdown. Truly, our society is undergoing a nervous breakdown with psychos running all over the place, like the sleazy surgeon (Christiaan Westerveld) with an East European accent who performs a bloody breast implant on Serena (Ely Jackson).

Despite its raw content, there is a glint of hope when one of the characters, Chauncey (David Cameron), decides that male prostitution isn't for him. His conscience, Vox Rationis (Adrien Essler) appears as a black pimp urging him to be moral.

All through the show, I was wondering whether this play would be more successful as a musical. Instead of the screeching and shouting throughout the show, the energy can be used more for singing and dancing, making this dark comedy lighter than the heavyweight it is as straight drama.

This is the kind of show where you'd come out of the theatre wondering whether you liked it or not. But when a play like this bothers you, you tend to say, "Well, if it bothers you, then there must be something to it."