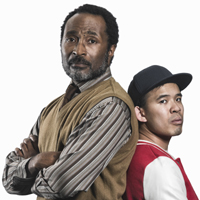 A Prayer for Owen Meany by Simon Bent

I should preempt this review by saying I am a fan of John Irving, author of the book A Prayer For Owen Meany, and this book in particular holds a special place in my heart. A beautiful story of two friends growing up in New Hampshire, with themes of religious faith, loyal friendship, love, death, and miracles.

This book, on which a fan once commented, “if you have become jaded and cynical, Owen Meany will restore your faith in God, this world and yourself,” has too much depth to be conveyed fully or even partially on stage. Irving himself said the story was unfilmable. And yet, it was adapted for live theatrical performance by Simon Bent in 2002 and condensed into a 2 hour 22 minute play that feels like it barely skims the surface, offering a most superficial re-telling of this very special story.

Largely conspicuous omissions included the famed armadillo with all its significance and symbolism, (I was heartbroken to see it omitted), details on John’s deeply important relationship with his stepfather Dan, and really any kind of depth for any characters other than the story’s two main protagonists: John Wheelwright and Owen Meany.

Adaptation limitations aside, I must admit that Chris Lam was outstanding as Owen Meany. No small task (figuratively speaking), Lam did an astonishing job bringing to life the diminutive Owen with his unearthly voice and prominent ears, and he delivered Owen’s sarcastic yet serious dialogue with a never-faltering strangled high-pitched voice. I was suitably impressed.

An interesting choice was to cast Anthony Santiago as John Wheelwright, not only because John was written to be as white skinned as any waspy New Hampshire kid, but because Santiago (who must be well into his 40s at least) plays John’s character from a young child, age 10, to teenager, and beyond. At the start of the play I was dubious, very dubious of this choice. But by the end, my disbelief was appropriately suspended and I was won over by Santiago’s earnestness.

I can’t say there were many other elements to this play that impressed me as much. The blocking was distracting; the audience flanked the stage on three sides and often there was an actor standing right in front of me, with their back to me, directly blocking the action. A few other actors gave cringeworthy performances as they overdid squeals, cursed, or flailed around on stage. And some of the characters (such as John’s mother Tabby, played by Alexis Kellum-Creer, and grandmother Harriet Wheelwright, played by Sue Sparlin) had potential to shine, but not nearly enough stage time or the opportunity to stand out more.

Ultimately, I found my mind wandering (not a good sign) and wondering what John Irving would think of this abridged/altered performance. As a student of literature and a fan of Irving, I’m inclined to say rather regrettably that he would likely be as unimpressed as I was.