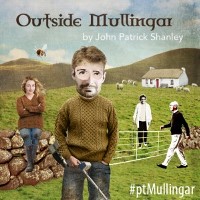 John Patrick Shanley is a favourite playwright of Pacific Theatre, and Outside Mullingar is an excellent pick to end their 2016-17 season on a strong note. Pacific’s unique stage set-up (where audience seating is divided into two facings halves that flank both sides of the stage) has always been a favourite of mine, as it creates a claustrophobic style of observation that perfectly reflects the insulated and reclusive theme of the play.

Set in a small Irish farm town called Mullingar, two neighbours and their families reconcile a history of farming and family values (often dysfunctional ones) being passed down to the next generation. The stage set-up reveals a modest, rustic kitchen with father and son engaged in post-funeral dialogue - they’ve invited Aoife (newly widowed neighbour played by Pacific veteran Erla Faye Forsyth) and her daughter Rosemary (Rebecca deBoer) for tea. What follows is a complex story full of traditional superstitions and self deprecations that turned into a rather disarmingly tender love story.

Pacific Theatre’s own Artistic Director Ron Reed plays the part of Tony, father to Anthony (played by John Emmet Tracy). As with most Shanley plays and certainly a trademark to the types of production put on at Pacific Theatre in my experience, this performance’s rapid fire dialogue is on point, and further impressive knowing that the actors are firing verbal shots in an Irish accent to boot. Recognition must be given to dialect coach Adam Lane Bergquist for preparing the actors, who were well near flawless with their accents. Though I’ve seen both Forsyth and Reed in other productions and knew they were not native Irish, I was kept guessing whether John Emmet Tracy and Rebecca deBoer were actually from the hills of rolling green.

At the heart of this tale is the juxtaposition of old and new. At one point Anthony tells his father “Your whole generation has killed this country with your negativity.” It’s easy to understand how Anthony and Rosemary have spent years isolated and self protective. This makes later scenes of tenderness all the more vulnerable, to which the audience reacted in hushed silence. Indeed, as one character states, “the quiet around the thing is as important as the thing itself.”

Pacific Theatre’s final production of the season is brave and genuine, with a well-paced flow that is skillfully acted. With many subtleties and nuances, this play keeps the audience engaged and thinking throughout and well after it has ended.