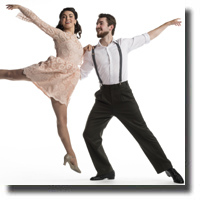 We have a great view from the second row. It's opening night at the new Anvil Centre Theatre and it’s a full house.

Rogers and Hammerstein produced some great musicals and tonight we are transported back in time to hear some of their memorable musicals.

The works are from Oklahoma, The King and I, South Pacific, Carousel, Pipe Dream, Flower Drum Song, Me and Juliet, Cinderella, The Sound of Music and State Fair.

The stage has three white backdrops on which colored lights are projected which added a pleasant softness to the stage. The singers are dressed in 50s attire and the dresses have crinolines which only those over 60 would probably remember. (I would be one of those old fogies).

Nothing could be more wonderful than a group of performers who really love what they do and really show it. There are some well-done comical expressions and one-liners that draw laughter. The cast know their lines and don’t miss a beat.

When the cast sings “Oklahoma,” most of the audience are singing right along. This evening is filled with old memories that float around the theatre.

If you haven’t been to the new Anvil Centre Theatre you must make a point of going. The acoustics are very good and the seating arrangement makes it easy to see the stage no matter who is in front of you. The staff was amazingly attentive and actually made the effort to show us to our seats.

I find that tonight’s performance seems to have something lacking in the production as a whole. There seems to be some disconnect and lack of substance. The costumes worn by the heroines in the original musicals were definitely more sophisticated and not as stiff-looking as those on stage tonight. Why “We Kiss in the Shadows” was done by two men was questionable. (This was not in the original score either).