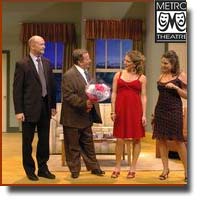 Metro Theatre kicked off its 2008-09 season with a delightful comedy eliciting laughter for every punch line that only a playwright like Neil Simon can concoct. Add to this the perfect timing of these professional and semi-professional actors as they deliver their lines flawlessy, and know when to pause to hold for laughs.

Pat McDermott as "the slob" Oscar and Mark Lewis as the hypochondriac Felix were simply fantastic. They were as funny, sometimes even funnier, than Walter Mathau and Jack Lemmon when the film version of this play was produced years ago. This a sequel to Simon's The Odd Couple, and this version is referred to as "a new look at The Odd Couple."

What adds spice to this show is the second half where the Spanish sisters, Inez and Julia, played by Anita Reimer and Lyvia Cohen, come in and play word games with Oscar and Felix. At first, the dialogue is funny, as they play the pronunciation game, but after a while, one tires of their word games. Perhaps a little editing should come in play here. But the rapport was great, and the opening night audience gave the two sisters a warm applause after their exit lines.

The other actors, the poker buddies of this odd couple--Randy Thomas, Chris Wanjoff, Ryan J. Johnson, Paul Kloegman-- delivered their lines quite well, and hit those typical Simon punch lines with relish. The principal players--McDermott, Lewis, Reimer and Cohen--are new to Metro, making their debut in this Simon play. I hope to see them again in plays to come, as they are indeed very talented and entertaining.

I also enjoyed the choice of music, including Paul Simon's "Julio at the School Yard", making fun of the pronunciation of Julia as Hoolya. There was also a recording of Placido Domingo singing Spanish songs during the 15-minute intermission, giving that Spanish flavour to the show.

It's always a delight to come and watch the Metro shows. Metro Theatre is now in its 46th season, and the repertoire of plays has always been interesting. Make sure to drop by and watch this show, especially when you're having your usual problems at home and at work. This comedy will surely make your day.

Congratulations to Director Schamberger and the production staff for a truly entertaining evening!