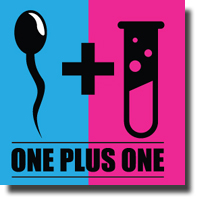 Pipedream Theatre Project
One Plus One by Gil and Sarah Jaysmith

This brand new musical from local composers Gil and Sarah Jaysmith explores the heartbreak and havoc wreaked on relationships by infertility. Directed by April Green, musical direction by Clare Wyatt, and choreography by Aaron Lau, the show was long (3 hours) but the music and humour made up for it.

In Director April Green's notes, she mentions the timely and happy progress of the husband and wife playwrights Gil and Sarah Jaysmith who succeded in their other project. After 14 years of IVF treatment, Sarah was pregnant and now has her baby. This coincided with the progress of this musical project which started rehearsals in April when Sarah's baby boy, Galen, was born.

This musical is thus very personal to the Jaysmiths as it deals with the problems of infertility and the determination to keep on going until they were successful. A lot of parents give up, as did the other couple in the show Oliver (Sean Szutka) and Holly (Stefanie Stanley Dalton).

All in all, this was a talented cast of singers and actors. led by Danielle Lemon (Madison) and Matt Hume (Alex) who had fabulous voices as well as did the supporting cast. Katie Purych (Nikki) plays the younger sister of Alex,and she did get a lot of laughs on opening night. Erin Matchette (Sylvia) plays the mother of Madison, overbearing and pushing her into getting pregnant so she could be a grandma. Her husband, Michael (Francis Boyle), an ex-military man, treats his daughter like a soldier and hates his son-in-law for not being a man and getting Madison pregnant. Boyle's voice was the most resonant among the cast members. Mark Wolf (andy) plays the doctor, and he played his role quite well delivering his lines robotically like any doctor today who talks over our heads with all their medical acronyms.

The music and the songs were Broadway-style and very catchy. Sarah is an accompanist, voice teacher. composer and a music director. The songs were accompanied by just a piano with Clare Wyatt as the pianist and also Music Director. The choreography by Aaron Lau was well-paced and quite creative. I liked the ensemble singing and choreography of "The Biological Clock" and the last song, "The Choices We Make Again".

Breanne Jackson's set design was simple but effective and functional. Large colourful play blocks were used for different functions: bed, chair, table, etc., as they were moved around from scene to scene. Garreth Lau's lighting design was well-equilbrated with the pace and design of the show.

Kudos to the creative and production staff of Pipedream. Looking forward to reviewing your next project.