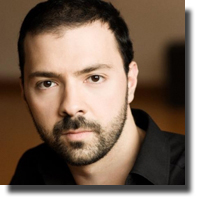 Orange Noyee (Montreal) and the PuSh Festival
ONE

Previously only performed in the context of theatre festivals, Orange Noyée’s (trans. drowned orange) one man show is performed by company founder and show creator Mani Soleymanlou. It’s an autobiographical story of the playwright’s experience growing up in Canada as the son of Iranian immigrants (Soleymanlou dislikes the word “immigrant,” yet, oddly prefers “exile”).

The performance starts with an unseen Soleymanlou giving the audience permission to leave their mobile phones on (one patron obviously took his tongue-in-cheek invitation seriously). When the lights go on, we see the solo performer wearing a black V-neck tee-shirt and black jeans sitting in the middle of six rows of seven evenly spaced chairs. He acts deliberately awkward, even pretending to flub his lines (or perhaps he wasn’t pretending), as he begins to describe his family’s migration from his birthplace in Iran to Paris, Toronto and Ottawa, before finally settling in Montreal.

Soleymanlou’s time in Montreal is characterized as a conflict between a Quebec identity bestowed upon him by native Quebecois (perhaps a backhanded compliment to his simulation), which he rejects in an endeavour to connect to his Iranian roots and the country he left behind at such a young age. If Soleymanlou is confused about his identity, the audience is entitled to be confused about Soleymanlou, who occasionally switches between English, French and Farsi throughout the performance.

The performer is at his cynical best when revealing thought-provoking anecdotes. On the family’s frequent trips back to the homeland, Soleymanlou recounts how his mother would always change both her clothes and her disposition in the Amsterdam airport before embarking on the connecting flight on an IranAirTM flight to Tehran.

At roughly two-thirds through the show, Soleymanlou moves his emphasis to the 1979 Islamic Revolution of Iran which involved the overthrow of Reza Shah Pahlavi, replacing his regime with an Islamic republic under the anti-Western authoritarian Ayatollah Khomeini. But these are historic facts that many audience members who were around at the time would likely be just as acquainted with as Mani Soleymanlou.

I really believe that there is an excellent piece of theatre in here somewhere. Possibly in Soleymanlou’s follow-up play, DEUX, already performed in French in Montreal featuring stage partner, Emmanuel Schwartz.