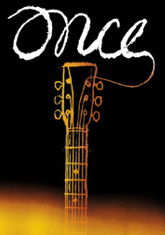 What happened to those days when Broadway was Miss Saigon, Phantom of the Opera, Jesus Christ Superstar and 42nd Street? All that spectacle is gone, and all we have are skeletal sketches of what was in the past the great Broadway shows of yore.

Everything now is an adaptation of films. Just last week, Arts Club did a musical based on a film, A Christmas Story. And now, we have ONCE, a new musical based on the film by the same name. I'd rather refer to these types of musicals as "mini-musicals" because they don't have the spectacular effects and the big cast of the good ol' musicals.

When someone pays so much money to see musicals, one expects to get his/her money's worth. But judging from some of the comments in opening night's performance, I felt some didn't get their money's worth. I also didn't find the music interesting, as it had a lot of Irish in it, and I don't particularly like Irish music. The only song that passed for me was "Falling Slowly" which won an Academy Award.

The plot is simple: it's a story of an Irish musician and a Czech immigrant drawn together by their shared love of music. But as in most musicals written these days, there's never really a happy ending as their romance doesn't end in "happily ever after". I must admit that although I didn't like the songs, the versatile actors were quite good in all aspects: singing, dancing, playing instruments, and scene changing. One very important thing-- I couldn't understand the lyrics as our hero, Guy, (Stuart Ward), would emote too much as he sang, sacrificing diction and clarity. Our heroine, Girl (Dani de Waal), was bettter off with her diction, but at times, whether it was a microphone tech problem, wouldn't come out as clear.

The antics of the rest of the cast gave a little comic relief to the show. Perusing over the programme, I didn't see the name of one of the cast members, Zander Meisner, who was interviewed below. But his bio is in the programme, and from the interview below, he is an understudy of Eamon, Andrej, Svec and Emcee.

In 2008, Glen Hansard and Markéta Irglová became the unlikeliest recipients of Best Original Song at the 2008 Academy Awards in the Academy’s eighty year history. The song was “Falling Slowly” and the film, a love story about an Irish busker and a Czech immigrant, was ONCE. Hansard and Irglová have long since gone on to solo careers, but their story has taken on a life of its own as a stage musical.

Later this month (November 17 – 22), Broadway Across CanadaTM touring company rolls into town for eight performances of ONCE at the Queen Elizabeth Theatre. One member of the company hoping to step across the boards is multi-discipline performer, Zander Meisner who understudies for the roles of Eamon, Andrej, Svec and Emcee.

Zander is a 31 years old actor/musician who hails from Deerfield, a suburb of Chicago, but has spent a major part of his adult life plying his trade in the ‘Big Apple.’ He’s a graduate of Indiana University Bloomington with a BS in Music with hands on experience in marketing and advertising of theatrical productions. He talked to me via SkypeTM from Calgary, earlier this week just ahead of an afternoon rehearsal. I asked him how he liked being a part of the ONCE cast. “Great job, but we’re in the final leg of the tour with just more two months to go” he answered.

Zander doesn’t mind hearing the show’s signature song every night, even though he feels that it gets overused. “My mother re-married earlier this year. When the wedding band started playing Falling Slowly, I had to stop myself from laughing.”

Growing up in Illinois, he learned to play clarinet and piano, and frequently performed in high school shows, eventually discovering it was more fun acting. When on tour, he takes along his clarinet and plays to relax during time off.

When I asked Zander if there has been anyone who has offered special inspiration, He took time to think about his answer. “Hmm… Let’s go with Ray Bokhour, (he appeared as Da in the musical’s first year of the national tour) who was kind of a mentor to me in my first year with the show. He was inspirational both professionally and socially – a really awesome individual.”

Zander was initially reticent to discuss personal accomplishments, but admitted he was proud to have been selected to join the touring company of ONCE “Career-wise, I felt a sense of achievement going up against such tough competition, then getting the call to join ONCE and sticking with it for the entire tour of more than two years.” “Oh, and I received a ‘Best Actor’ award in Denver for the role of Bobby Strong in Urinetown” he added as an afterthought.

There was less hesitation when asked about his hypothetical preference for any future roles. “I would love to play Tommy Devito in the musical Jersey Boys. As for drama, I’d go for Prince Hal (Henry, Prince of Wales) in Shakespeare’s Henry IV.”

Zander Meisner is already enthusiastic about his next paying gig when his stint with ONCE is over in December. “After a couple of weeks off, my next job will be in Peter and the Starwalker in Upstate New York early in the new year.”

Zander has an easy-going confidence, freely able to engage with total strangers on any level. With that kind of chutzpah - future success is virtually assured.