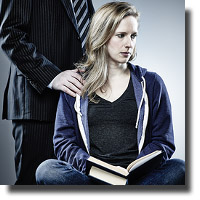 Oleanna is David Mamet’s two-handed power play in three acts that focuses on a discordant student-teacher relationship. Its title is intended to be ironic, borrowed from a folk song made popular by the late great Pete Seeger, it expounds a vision of a Utopian society.

Written a couple of decades ago, perhaps partly as a reaction to the highly controversial and very public Clarence Thomas and Anita Hill scandal that set off public awareness of workplace sexual harassment; it underscores the disastrous effects of poor communication skills and unreasonable political correctness.

Carol (Susie Coodin) is a freshman student struggling with the course material set out by her professor (Anthony F. Ingram). In different ways, both characters are deeply flawed. Throughout the play John and Carol never seem to understand each other, or even appear to live on the same planet. As the narrative evolves, Carol moves from victim to vindictive, while John goes from pompous and patronizing to pathetic.

Director Evan Frayne manages, at least to a degree, to uproot the play from its original setting by the use of a mobile phone and allowing the caller (usually John’s wife) to be an unseen third character. Frayne also lets the escalating narrative arc sustain a natural pace.

Anthony F. Ingram turns in a stellar performance as the disconnected college professor, but it’s Susie Coodin as the divisive student that really impresses. She doesn’t petition the audience’s sympathy, nor does she receive it, in a nuanced depiction of a distressed student who transitions to a self-righteous feminist besting an intellectual superior.

Carolyn Rapanos’s functional set of John’s wall-less office is staged at floor level in the centre of the Havana theatre, providing an intimate theatre-in-the-round concept.

In Oleanna, David Mamet inveigles, even urges, the audience to take sides. He also provokes the observer to identify a motive for Carol’s destructive mien. For everyone that sees this play there is a potentially different resolution.