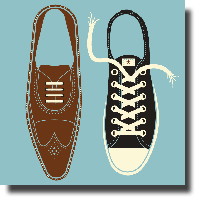 Arts Club on Tour
The Odd Couple by Neil Simon

This touring production of The Odd Couple marks the 50th anniversary of its Broadway premiere. Neil Simon’s comic masterpiece certainly has staying power. Its durability stems in part from the comic perspective it takes while dealing with issues such as suicide, divorce, madness and alcoholism.

There is much more to this play than its subtitle, “the classic comedy of mismatched roomies,” suggests. The first act opens on a poker game being played in Oscar’s New York apartment. The one-liners flow fast and furious, but something is amiss. One ‘regular’ is missing, and they are worried because he has a reputation of being histrionic. Soon they find out from his wife that she has kicked him out of their home. With divorce imminent, it seems likely that the missing poker player, Felix, is possibly suicidal. This only intensifies the comic one-liners. Soon Felix appears and the humour is ramped up even more.

Before too long Oscar (Mike Wasko) is inviting Felix (Robert Moloney) to live with him. They’re both writers (Felix does News and Oscar does Sports), so things should work out, right? You’d think so, but by the end of the first act mugs are being hurled at walls, and they are practically at each other’s throats, because Felix is such a neat freak, and Oscar is such a confirmed slob. This could get dramatic if it were not for Simon’s comic genius. His characters cannot help but find the funny side of everything.

This Arts Club touring production is virtually identical to the production that took the Stanley stage by storm in 2014. The review I gave then remains largely true today: “Odds are very good that you won’t find more laughs or a funnier comedy this Spring.” One caveat concerns Mike Wasko as Oscar. He is entirely as believable in the role as Andrew McNee was, however he does not bring as much of the athleticism as McNee did. His Sports writer is more the armchair warrior variety rather than say, the weekend warrior.

The Pigeon sisters are even funnier than I remember. They’ve no doubt become even more comfortable in their roles than the first go-round. The same could be said for the ‘gang of gamblers’ and it all goes ‘double-down’ for Robert Moloney, who absolutely shines in his performance as Felix.

I would give odds that you’re sure to laugh at The Odd Couple.
.