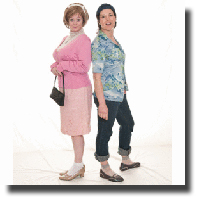 The Frolicking Divas production of The Odd Couple is an entirely re-imagined stage adaptation that replaces Oscar Madison and Felix Ungar with Olive and Florence (surnames unchanged) and updated to roughly present time. Lisa Dery (who plays Olive) and Lori Watt (Florence), who are also co-producers, have taken a considerable risk and given themselves big shoes to fill. Walter Matthau and Jack Lemmon were hugely successful portraying the mismatched pair in the film version, and Jack Klugman and Tony Randall pushed contradistinction to new bounds.

This rather whimsical version actually works; largely due to cleverly creative conversions (like substituting poker night with the more female friendly Trivial PursuitTM night), the special chemistry between Dery and Watt and some accomplished comedic performances by supporting actors.

The show starts zestfully enough with gal-pal quartet Mickey (Emmelia Gordon), Vera (Joni Hayden-Summerton), Sylvia (Meliisa Oei) and Renee (Veenu Sandhu) showing some cool dance moves to Pat Benatar’s Love is a Battlefield. Olive who lives alone, opens her New York apartment with “a view of New Jersey” to a weekly game of Trivial PursuitTM when the girls generally get together to diss about their respective spouses.

When Florence’s husband unanticipatedly (at least to Florence) ends their relationship after fourteen years of marriage, Olive, with some trepidation, decides to takes her self-absorbed, neurotic friend into her home. Over the course of the next few weeks their shaky friendship takes on the look of a married couple just one heated exchange away from a bitter divorce.

Lisa Dery and Lori Watt, who take on the responsibility for the diverse lead roles, turn in stellar performances. Among the cache of friends, Melissa Oei as the sardonic Silvia was particularly outstanding - I would have loved to have seen more of her on stage. Emmelia Gordon was way over the top as police officer Mickey, Joni Hayden-Summerton was copacetic as the scatterbrained blonde Vera. Veenu Sandhu, a late replacement for Sarah Szloboda, was unexceptional as Renee, but in fairness had the least interesting role and perhaps the least time to rehearse.

The Odd Couple is not going to be the most captivating piece of theatre to be seen this season at the Jericho Arts Centre, but, as I’m sure that even Neil Simon would agree, it’s certainly a lot of fun.