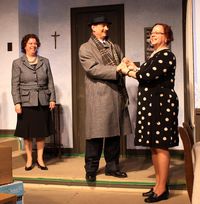 I like this play and I like the way it was directed, acted and produced. The set was well-designed, the acting superb, and the mise-en-scene--close to perfection. - Karen Golden (Sarah O'Conner), Mary Adams (Liz O'Conner) Margaret Shearman (Martha O'Conner), Kathleen Kelly Driscoll (Aunt Margie) and Chuck Buckley (Dr. David Stevens) played their roles to the T.

Set in Minnesota in 1997, this play explores family relationships. After Tom O’Conner passes away, his wife and children come together over Christmas to excavate his mountain of personal effects. As the family sifts through boxes of papers and bags of clothing, clues to the quiet patriarch’s life are discovered.

Director Wayne Nolan has won awards both as a thespian and director. I could see his experience doled out in this production: the pacing was excellent, the stage composition was superb, the actors knew when to hold their lines as the audience laughed at the punchlines, and their stage presence was charismatic.

The playwright, Katie Forgette, who has written a number of plays, is an American living in Seattle and has acted for the Seattle Repertory Company for a number of years.

Kudos to Vagabond Players. This is so far the best production I've seen from this company. Make sure you buy your tickets before they sell out.