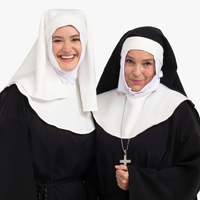 A show called Nunsense sets us up for an evening of silly, probably irreverent fun, with a risk of falling on its face by being corny. Fortunately, this Boone Dog Production at our iconic Metro Theatre, treats the audience to a comedic treat, full of giggles, chuckles and out-loud laughter, thanks to the excellence of all involved.

Our eyes first meet the set. The stained glass effect certainly sets the theme attractively without overwhelming the senses, and the clever use of space enhances the look and functionality of the stage throughout the performance. Lighting is effective, at times brilliant, and the sound engineering is superb, with never a line lost to the ear.

The keen direction of Gillian Barber fills the stage with action at all times, well placed, purposeful, and fine-tuned to delight the audience. The talents of the five stars of the show raise it to its heights, however. They sing, dance and act their hearts out, all with such delightful ease and fun, that there’s little wonder that the audience is brought into the action whenever they wish.

Nancy Herb skillfully sets a familiar tone to Catholics in the audience as Mother Superior of the group, expecting obedience, sighing at her responsibilities, and taking them very seriously. Caitriona Murphy delights as Sister Mary Hubert, in charge of novice nuns, but eyeing and aching for the position of the Reverend Mother. Sheryl Anne Wheaton is an impressive Sister Robert Anne, rebellious, persistent, and a surprising anchor for the cohesion of the group. Meghan Anderssen shines as the forgetful and bumbling Sister Mary Amnesia, surprising and delighting all with unusual talents. Sarah Mercier adds innocent charm as novice nun Sister Mary Leo in a very able, authentic performance. All the characters masterfully show their desire to blend their human yearnings and ambitions into their religious calling, adding depth to their portrayals.

Nunsense is set up as a variety fundraiser, put on by the nuns, to raise money for a surprising reason. The show they put on is wonderful. You’ll have to attend to find out where the funds will go.