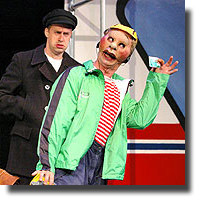 I am still smiling after seeing this play. The show was sold out and was, in my opinion, a tremendous hit. Wayne Specht, as director, should be proud of this funny, successful and, at times, complex production.

This cast is, of course, top calibre. Not only were the roles well acted, but the choreography and acrobatic feats were deserving of great praise.

The stage consists of the inside of half of a BC number 14 transit bus. The characters are constantly changing; after all, we are on a bus and we all know how diverse the ridership can be. Incredibly, creative masks produced by Melody Anderson were vital to the success in the creation of so many unique characters.

The costumes by Nancy Bryant were bizarre, colorful and well thought out. There were the elderly, school kids, thugs, boring morning commuters with their cell phones and brief cases, nut cases and try-to-be free riders.

One of the funniest parts was an Italian woman (Morgan Brayton) who gets on the bus in slippers then proceeds to get dressed and puts on make-up before she meets with her home buyer. She virtually goes upside down trying to put her pantyhose on.

The use of faces on magazine covers to change the faces of a male and female rider was a piece of genius. The stars, Christopher Adams, Morgan Brayton, Stefano Giulianetti, Neil Minor, Tracey Power, Sarah Rodgers and Scott Walters, portrayed the many characters with excellence. The entire stage design, presentation and effects were handled with perfection.

There was not a dull moment in this play, and the audience kept laughing from beginning to end. This was entertainment at its best. The Number 14 is a must see.