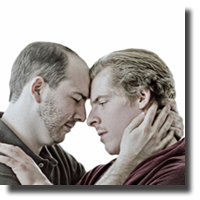 Strident and confrontational gay activists like Ned Weeks (Kazz Leskard), the protagonist of The Normal Heart, derive much of their motivation from a heightened sense that public concern for AIDS/HIV issues is here and gone like the boys of summer from a Henley hit of yesteryear. But unlike the bubble of pop music melodies, the controversial issues of this play have staying power. The Normal Heart has been around since its early mid-eighties off-Broadway success, and more recently, it hit the television market with a 2014 HBO film adaptation. Now until August 16, Ensemble Theatre Company is staging a powerful, dramatic local enactment.

If this production of The Normal Heart offers viewers an intelligent and passionate look at socio-cultural stereotypes and prejudicial attitudes towards homosexuality, it does so with an understated John Bessette set designed to accentuate the actors’ craft. It also affords theatre-goers the chance to explore perspectives on the history of a disease that was first marginalized and later stigmatized as a ‘gay’ problem. When such complexities are examined from a broadly-flavoured variety of viewpoints, new understandings emerge—for better or worse.

Ned Weeks’ point-of-view about how important it is that gay men be open about their sexuality dominates throughout the entire play. Leskard does an excellent job of putting a human face on a character who is a particularly abrasive controversialist; his Weeks is smart, sexy, and savvy.

The play is set in the early 1980s at the start of the AIDS epidemic. Ned meets Dr. Emma Brookner (Rebecca Walters), who makes an impassioned plea that he tell gay men to stop having sex, because more and more gay men are dying of what was at the time an unknown disease. Ms. Walters skillfully enacts a convincing portrayal of her character’s frustrations due to a struggle with a health organization that is out of step with Brookner’s priorities and challenges. Her final dramatic monologue is the highlight of an excellent enactment, and Walters delivers it with just the right amount of clarity, irony, frustration and passionate intensity.

Ned decides to begin a crisis organization and enlists the support of his lawyer brother Ben (played with just the right amount of stodgy detachment by Matthew Bissett). The play is an account of the early days of controversy surrounding the formation of that crisis organization, and it includes Ned’s love relationship with New York Times fashion correspondent Felix Turner (played with sensitivity and finesse, whether thriving or dying, by Daniel Medron) and his power struggle with the crisis organization’s closeted president, Bruce Niles (played with a kind of arrogant sense of entitlement born of what passes for good breeding by Zac Scott).

Kazz Leskard gives what is quite possibly the most compelling, sensitive and nuanced performance of his career. He is at his most convincing and persuasive when his character is up against public apathy and indifference towards his cause. But ironically, much of this antipathy comes from within the very organization Weeks helped to found.

Zac Scott’s portrayal oozes privilege and poise. Mark Manning makes his Micky Marcus first sympathetic, then histrionic, and finally hysterical. Adam Beauchesne invests his Tommy Boatwright with a world of laconic luxury and southern comfort. Troy Anthony Young is a suit who suits his part as he briefly delves through the dance of hypocrisy. But the ultimate irony is that macabre marriage scene, pushing melodrama over the top to upstage all the actors and leave the audience stewing on a grisly metaphor, gristle to gripe their already churning guts.