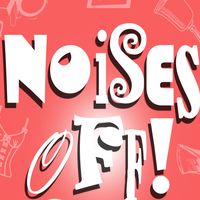 Artistic Director Ryan Mooney does it again with a successful production of this zany, hilarious and classically comic play.about a cast of itinerant actors rehearsing a flop called Nothing’s On, a farce in the style of the comedie francaise, with doors slamming, on and offstage, intrigue, and ...sardines?

The actors kept the audience laughing all through this 2.5 hour play.which, according to Mooney, has always fascinated him from both sides of the footlights. Like Pirandello's Six Characters in Search of an Author, but in a comic vein, we see the fourth wall broken as actors participate from the auditorium.

Val Dearden gave us a sample of her comic prowess, and all the actors as well delivered to make the play appear like a real flop, reciting lines with the wrong cues, moving in and out at the wrong times, and giving prompts when none was necessary. It must have been fun rehearsing this play, as the actors seemed to enjoy themselves being foppish. What amazed me was how they all worked as an ensemble, especially in the second act, backstage, doing their shenanigans all in pantomime mode.

The show runs for the next two weeks. Be sure not to miss it.