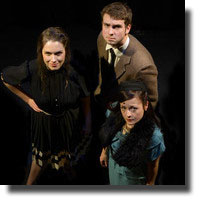 This is a must-see show! Directed by Tanya Mathivanan, this Sartrean classic adapted from the French by Paul Bowles was well directed and the four actors --Jordan Kerbs, Harrison MacDonald, Annie Arbuckle and Michael Stewart--were all top calibre.

The pacing of this 1.5 hour was perfect, and I liked the final touch of Mathivanan. As the actors were still continuing their dialogues silently, as though the play would never end, as this was hell's eternal punishment, the lights go up and the audience slowly leave the theatre.

I congratulate this new and budding theatre company. I hope they do more plays of a classic nature, because the quality of the actors is right up there together with what professionalism and serious theatre is all about. The production staff did a great job-- Set Design by Sarah Melo, Lighting Design by Patrick Smith, Costume Design by Laura Fukumoto, Sound Design by Javier Sortres, and stage managed by Erica Leduc.

Sartre's sardonic approach to what hell is all about, that "hell is other people", is depicted clearly in this play when we see three characters (a prostitute, a lesbian and a coward), all with conflicting personalities get at each others' nerves for all eternity. This play was written in 1944, and yet it maintains its universality. That's what makes a play a classic. It can be shown 70 years later and still have relevance.