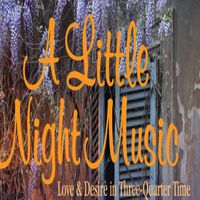 
I went into this performance of Stephen Sondheim’s classic A Little Night Music cold, having never seen it and not knowing the story. I feel I should include the following disclaimer: I am not a big fan of musicals. While friends have fawned over The Sound Of Music, I gravitated towards edgier theatre experiences. Luckily, A Little Night Music does have a bit of a dark side.

Being my first time at the Anvil Centre, I was pleasantly surprised – this venue is even more attractive and elegant on the inside than it is from the outside, which is saying a lot. The theatre itself is small but intimate, and Director Peter Jorgensen opted to not have the cast use microphones for the performance. At times I’ll admit it was quite difficult to make out words being sung, yet in spite of my lack of familiarity with the story I feel I still gleaned its essence – lovers, quarrels, follies, and a dinner party where jealousies flare.

A highlight was the opening sequence – Jorgensen kept Sondheim’s vocal warm-ups but added a modern twist, where characters enter the stage in their street clothes, warming up while disrobing, revealing turn-of-the-century undergarments and bustiers under their clothing.

Favourites among the cast included Warren Kimmel playing Fredrik Egerman, and Nick Fontaine in the role of Count Carl-Magnus Malcolm. These two not only best projected their voices and articulated each sung word amazingly well, but their on-stage presence (particularly together) really conveyed impressive emotional ranges. Kimmel as Egerman along with Katey Wright as Desiree Armfeldt provided one of the only believably tender moments in the play. And Kimmel and Fontaine’s absurd rivalry offered the audience more than a few opportunities for a laugh.

Caleb Di Pomponio as the young Henrik Egerman was also excellent as the serious, studious son of Fredrik, and amongst his impressive acting and singing chops, he was also an unofficial 7th musician, whipping out and aptly playing a cello in an early scene. And Madame Armfeldt, played by the graceful Patti Allan, was well loved by the audience in the role of Desiree’s sexually experienced yet casually disapproving elderly mother. Allan brought shades of Maggie Smith’s Lady Violet Crawley of Downton Abbey to her character, which garnered a healthy amount of audience laughter and appreciation.

Another highlight and personal favourite was Countess Charlotte Malcolm, who in spite of being unforgivably disregarded by not only her husband (who at one point casually states “Charlotte is irrelevant,” in one of his more heartless speeches) but also by many of the other characters in the story, yet she manages to get in a few digs nevertheless. Played by Lindsay Warnock, who gives poor Charlotte more substance than her rather two-dimensional character affords, Charlotte is where we get to see some of the aforementioned wry, dark humour that I was so craving.

The six musicians comprising this production’s orchestra really stole this show, and deserve huge accolades. Particularly noteworthy was Pianist/Musical Director Sean Bayntun, whose incredible talent and seemingly effortless musical dexterity added noticeable energy and depth to each scene. The musicians in my opinion were the unsung heroes, pardon the pun, of this show – not demanding attention yet undeniably crucial to the show’s success.

Sondheim’s A Little Night Music is clearly a musically challenging masterpiece (albeit with some pretty seriously misogynistic undertones). More than once, he has multiple performers each singing a different song simultaneously (see: "Now"/"Later"/"Soon"), no small feat for any performer. Though somehow I felt the story itself lacked much depth, tenderness, or unspoken sentiments. This is no Shakespearean-style tale with layers or unexpected twists. I particularly felt that the second half dragged on a bit long, and after the dinner climax it really just sort of petered out, not able to match the energy of the more compelling first half, while falling into overly tidy endings.

Nearing the end of the performance, I began to relate to Madame Armfeldt - “You can hardly expect me to be paying attention” …but perhaps that’s just the non-musical-lover in me speaking. Having said that, the Anvil theatre really is a gorgeous, classy venue. I’d return anytime, even for another musical.