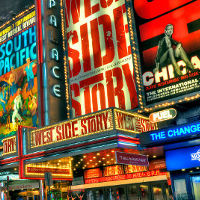 The opening night performance of Fighting Chance Productions’ A Night on Broadway is billed as the final show of the 2012-2013 season. If you enjoy informal ‘audition-style’ renditions of show-stopping hits, then this show is definitely for you. Our inimitable host for the evening and Master of Ceremonies is Fighting Chance artistic director, Ryan Mooney, and his winsome, unassuming and engaging autobiographical monologues keep our comfortable cluster amused and entertained between numbers.

Each evening in the show’s short run promises unique performances by a range of diverse entertainers. So you can go on consecutive evenings and never see the same show twice.

On opening night we were treated to performances by Melissa Braun, Natalie Aspinall and Lisa Penz. Steve Greenfield was a last-minute stand-in on the piano, and he did a stellar job. Ms. Braun took over while Steve sang Joanna.

Melissa Braun gave impeccable renditions of such Broadway standards as "Here I Am," "The Simple Joys of Maidenhood," and that rapid-fire Cinderella song from Into the Woods; but she really shone with lusciously held notes you wished would never end in her stand out performance of "f I Were a Bell" from Guys and Dolls.

Natalie Aspinall proved herself to be as capable an actress as she is a singer with her satirically flippant intonations, her curt casual kind of coyness, and her precise timing in numbers such as "Too Pretty," and "I Could be Perfect". Her rendition of "Somewhere that’s Green" from A Little Shop of Horrors seemed a little lacklustre, though.

Lisa Penz held forth impressively, whether on her own or sharing the stage with the featured guest, Bon Dos Remedios. Remedios and Penz gave the show some comic relief with their performance of "A Stud and A Babe." Lisa’s vocals combine a delicate, fine tone with a rare blend of understated wistfulness and expressive sentiment, including songs like "Nothing" from A Chorus Line, Home from Beauty and the Beast and a wonderful version of "Imagine My Surprise" from the little-known musical Personals.

If this evening’s excellent performances are any indication, A Night on Broadway will be worth seeing over and over again, especially because it will be reinventing itself uniquely every night.