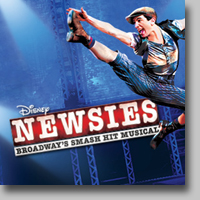 It was an entertaining show and the opening night audience was enthused by all the energy exuding from these young talented boys who are mostly making their debut in Broadway's professional theatre. From their bios, most of them have had regional experience and are just breaking into Broadway.

West Side Story went through my mind as these boys danced like the Jets and the Sharks, full of vim and vigor. Even the storyline has a tinge of West Side with the young lovers Jack Kelly (Joey Barreiro) and Katherine (Morgan Keene).

Set in New York City at the turn of the century, this musical was inspired by the real-life Newsboy Strike of 1899 when the newsboys ( ‘newsies’) go on strike against the publishing titan, Joseph Pultizer (Eric Scott Kincaid).

This feel-good musical is patterned after the stock characters of the commedia dell'arte where even the old couple Medda Larkin (Aisha de Haas) and Governor Roosevelt (Kevin Carolan) are loosely represented. Even the traditional mistaken identity technique is utilized, and like all musical comedies, all's well that ends well.

There's a twist at the end of the show which is typical of commedias, but you have to go watch this musical to savor it.

The Disney NEWSIES national tour production is in Vancouver for the Canadian leg of the tour with eight performances at the Queen Elizabeth Theatre. Audiences lucky enough to have tickets will get to see some of the most exciting choreography ever seen on a Vancouver stage.

An unexpected bonus might be the presence of Aisha de Haas on stage in the tangential role of Medda Larkin. Aisha comes from an illustrious musical family. Both parents were jazz musicians in Chicago. Her father is Eddie de Haas, a jazz bassist who played with such luminaries as Chet Baker, Miles Davis, and Blossom Dearie. Her mother is Geraldine Bey, formerly a part of the jazz trio Andy and the Bey Sisters. The other sister was the incomparable Salome Bey, Aisha’s aunt, who eventually moved to Toronto in the sixties and became a Canadian. Her brother Darius de Haas is a singer and actor in New York and was in the original cast of Kiss of the Spiderwoman.

Aisha talked to me by telephone from Albuquerque, New Mexico, where the show was running at the Popejoy Hall. I asked her how she liked being a part of the company of NEWSIES. “I’m having a wonderful time with the show. I’ve worked on Broadway, but it’s my first national tour” she replied.

I asked her “how would you describe your role?” “The character is based on the true life Vaudeville artist Aida Overton, who was well known around the turn of the last century.” Medda is a mother figure who runs a burlesque theatre and gives refuge to Jack Kelly.” “I only get one solo in the show – a Broadway style novelty song titled That’s Rich” she added.

“You have quite an extensive curriculum vitae that includes work in film and television, also singing back-up for artists like Oleta Adams and Patti Austin. How did working with these artists advance your career?” “I toured with Oleta off and on for about twelve years. We played concerts around the United States and Holland.” Aisha responded. “I learned a lot about the discipline needed.”

I asked Aisha if there has been anyone that has provided inspiration. “My own influences have come from jazz stylists like Ella Fitzgerald and Lena Horne” she affirmed. “Growing up in Chicago, I saw my parents playing in local clubs.”

While Aisha spent her formative years in Chicago, she was born in New York. Subsequently, she returned to ‘The Big Apple’ to realise her ambition of wanting to play Broadway. It didn’t take long before she was featured in the TonyTM award winning musical Bring in 'da Noise, Bring in 'da Funk.

After Vancouver, the next stop on the NEWSIES tour is Edmonton, then Calgary. After the tour ends in October she will probably take a short break before considering her next gig. When I asked if there were roles she might want to do in the future, she thought about it for a moment, then gave a surprising answer. “I would like to create her own role in show that is yet to be written” she responded.

Aisha de Haas has been to Canada many times, but this will be first visit to Vancouver. If we’re really nice to her, hopefully she’ll come back again soon.