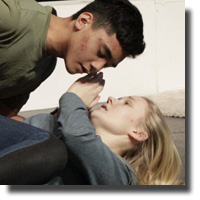 Younger-than-18-year-olds are of course meant to play the roles in Peter Pan’s beloved story; adults simply don’t capture the imagination and invention wherein kids view our adult world of grown-ups and grown-up responsibilities. Let me revise that – adults, with the exception of Robin Williams himself, simply do not capture the youthful charm of Peter Pan! So I was honoured to have the opportunity to experience this imaginative recreation of Peter Pan by Vancouver Tech’s Senior Theatre Company, with a special thanks to Artstart’s Susan Bertoia’s inspired modern adaptation.

Upon venturing in to find my seat in the intimate Vancouver Tech’s high school theatre, three sparkling and beautiful young flight attendants welcomed me to my “flight” (“Welcome aboard! Enjoy your flight!”), and soon these three hostesses would also act as narrators throughout the show with maturity and whimsy (and rather agreeable singing voices!).

Will Bacarac played the part of Peter Pan with an exuberant energy that was a strong presence on stage. His promise to the three Darling children as he whisked them away to Neverland - “you won’t have to do ANY work” - made me laugh.

Alternately, Ms. Hook (a twist on the usual male role of Captain Hook) played by Nya Gordon exuded authority and malevolence, which perfectly balanced out the playful energy of Peter Pan. Ms. Hook’s three lackeys also nailed the minion vibe of these do-badders, in particular Candra Rolfe’s over the top brown nosing was quite fun and drew laughter from the audience.

My favourite part of this production was possibly the group of Lost Boys, who in their gangly, rowdy, and boyish bravado really captured the sentiment of these forever boys (and really, who better to convey this than teenagers?). John Darling of the Darling children was entertaining as the exasperated older brother-turned lost boy-turned boyfriend to Lily Tiger. Ethan Yan as John miming being a doctor (as a kid would understand the concept) was hilarious.

Another highlight for me was a short but actually kind of sophisticated and imaginative shadow puppet piece. After the show, I read through some of the bios of the student actors and production team. This production had a great group with a lot of personality and a lot of humour. Well done Susan Bertoia (Director and adaptor of the play) and Ramona Orr (Production Manager/Assistant Director) for inspiring, directing, and producing this great performance with a pretty talented bunch of kids!