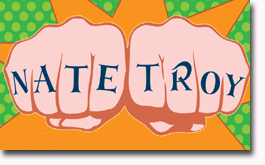 SHIFT Theatre
Nate and Troy: The Next Big Things

Shift Theatre Society's blog describes Nate and Troy's performance as "the perfect post-holiday pick me up." This was completely the opposite on opening night. Their witty banter and audience jeering made for meagre entertainment and dull comedic relief. The two local actors are close friends in real life and this set the tone for their sequel show to “The Next Little Things.”

While at first their stories seemed planned and coordinated, most of their monologues increasingly became unscripted and improvised. The funniest piece was a scene involving audience participation where each cast member drew an idea out of a hat and built on it.

Once two sheets had been drawn, the two comedians decided to reminisce. It appeared the show was only massaging their egos, and furthermore, there were a lot of personal quips and inside jokes as it it looked like mostly family and close friends were in the audience.

The venue was very basic and the only props were two stools and beer bottles. Nate and Troy encouraged everyone to purchase drinks during the show and to leave their cells on as they wanted people to Tweet and Facebook their event. In one part of the show, one actor spills beer all over himself only to have the patrons rush up and clean up the mess with paper towels.

In between their lacklustre storyline, it was challenging to make out what was comedic to a non-participating member of the audience’s inner cluster, and what was not.

There was no intermission provided, and the chairs were very uncomfortable. Sitting for nearly two hours caused the event to wear thin. In short, this reviewer was left wondering what really were Nate and Troy’s "Next Big Things."