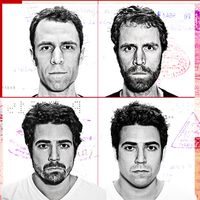 Two friends, one Jewish, Jacob and the other, Arys is Muslim have been friends since their teens. They go through trials and tribulations of their lives, but always come back to meet at their favorite watering hole. Through the years their friendship wanes and life changes drastically when Arya takes a trip to the Mideast.

Of all the productions that I’ve reviewed over the years this has got to be one of the worst performances that I have ever seen. This was not entertainment in any possible way. Let’s have a great script not low class sexual comments that only detracted from the play.

Seat some honest guests in the audience who will truthfully tell you as they see it before presenting a performance. If that had been done in this case the show would not have gone on. You can have great actors but without a great script an actor will appear mediocre, if not bad.

Kelly who played Arya is a good actor in a very bad play. Bernbaum, as Jacob appears awkward throughout the performance, his lines were not believable and inaudible at times. We could barely hear him and we were in row D.

As we left the theatre we could hear various comments. These comments I will not print. What happened to the days of stage props and stage design? Give the stage some life not just two dark wood chairs, a dark wood table on a dark stage. It would have taken little money and time to make cardboard bar walls and paint them like a bar. The stage backdrop and design has a big impact on an audience.

The lighting produced the effect of a multicolored stain glass window of a synagogue that illuminated the stage and was the only wonderful part of the performance.

I am sure that how we felt upon leaving the show was felt by the majority of the audience. Do you really want your audience to leave disappointed and really let down? This was not the effects from a sad movie but from a bad movie. Rewrite, rewrite and rewrite and turn a poor script into a wonderful script.