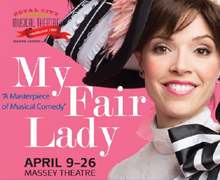 Feminists today would probably consider Bernard Shaw a chauvinist pig for writing Pygmalion on which this musical is based. In his play, and in this musical, Professor Higgins (Warren Kimmel) often insults Eliza Doolittle (Tracy Neff) calling her all sorts of names, including "garbage". Even the macho song "Why can't a woman be like a man?" is something women today would frown on for being politically incorrect.

However, some of the songs of Lerner & Loewe are classics. On opening night, Thomas Lamont (Freddy Eynsford Hill) got a rousing applause for his fabulous tenor voice after his rendition of "On the Street Where You Live". Tracy Neff's interpretation of "I Could Have Danced All Night" was fabulous; and Kimmel's "I've Grown Accustomed to Her Face" was quite moving.

John Payne was very good as Alfred Doolittle-- acting, singing and dancing away with his "Get Me to the Church on Time" accompanied by a wonderful ensemble of around 15 cast members who played other roles. Veteran actress Barbara Pollard (Mrs. Higgins) and Tiffany Hambrook (Mrs. Eynsford Hill) were brilliant as the sophisticated upperclass ladies in London's high society.

The set design by Brian Ball was exquisite, and the scene changes ran smoothly. Choreographer Suzanne Ouellete's dances were put together well and the costumes by Christina Sinosich were lovely. It was almost like a fashion show, especially during the Ascot and Ball scenes. I would have wanted to see, though, a few raggedy costumes, especially in the first scenes with Eliza and the street people, with them looking muddy or dusty, with torn clothes, perhaps.

Kudos to Artistic Director Valerie Easton, Musical Director James Bryson and Director Max Reimer for a wonderful production. RCMT in the past 26 years has produced quality musicals, mostly classic Broadway hits such as West Side Story, Oklahoma, Chorus Line, etc. We've reviewed many of their shows n the past, and we've enjoyed reviewing them.

Looking forward to your next production in 2016!