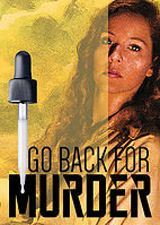 Metro Theatre
Go Back for Murder by Agatha Christie

Agatha Christie, in 1960, did a play adaptation of her 1942 novel Five Little Pigs. The story deals with Carla Crale trying to prove her mother (who died in prison) innocent of poisoning her father. Aided by a young lawyer, Justin Fogg, she returns to the scene of the crime and invites all those who were at the scene of the crime to reenact the suspicious event that occurred 16 years earlier.

This is another of Christie's whodunit plays where the least suspicious ends up being the murderer. As the scene is reenacted in the Second Act, we find out that the murder victim, Amyas Crale (James Sirois) is indeed an obnoxious character. He is pushy, a playboy, and treats people badly.

Although I am not at this point to say whodunit, I never guessed till the end who the murderer was. Probably because the motivation wasn't very clear, and so I must say that this isn't one of the better plays of Christie.

I found the acting quite good for community theatre standards. Sachi Lovatt (Caroline) was very good with her projection and stage presence. Kevin Ibbotson (Justin Fogg) looked and acted very British, but needs to project his voice more. James Sirois (Amyas Crale) should be more in character as a villainous type, like acting more pushy to motivate the other characters to hate him more. Jonathan MacDonald (Phillip Blake) should tone down his rage a bit. I felt there was a bit of overacting.

With regard to the sets, what happened to the beautiful and elegant Metro sets of yore? I remember all the beautiful sets created in the past, and I got the impression that probably budgets have been cut and cheaper cardboard was installed. In the first act, different dreary curtains were installed to distinguish different offices. And in the second act, the main action takes place at stage right. I was sitting at the left section pf the theatre and hardly could see the action taking place at the extreme right of the stage. I think that part of the stage should be moved more centrally because the left side of the stage (the terrace) was hardly used.

But all in all, I think the audience enjoyed the show. I liked the background music which had music from the 1940s to the 60s, and I also liked the innovative announcements about going to our seats and turning off our cellphones.