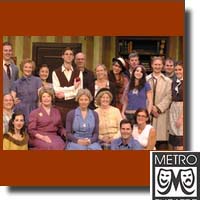 A Murder Is Announced by Agatha Christie

Tourneur has directed three other Agatha Christie plays for Metro Theatre, and from the opening night's show, I could see that he has his claws on murder mystery plays. I did enjoy the show and the opening night audience did as well, from hearing the cheers and applause during curtain call.

I marvel at the manner in which Christie holds us spellbound, diverting our attention away from the right path, giving us clues that point to characters we're convinced committed the crime, but then, to our surprise, we're wrong. And the one we suspect the least ends up being the culprit.

The actors delivered their lines well and were in character all through the play. Val Dearden was very convincing as the Machiavellian Letitia Blaclock. Tracy Labrosse and Chris Walters did a high-quality job pretending to be brother and sister. Gay Le Page was delightful as Miss Marple and her characterisation was superb as we notice her cleverness despite her fluffy exterior.

Deborah Tom as Dora Bunner was quite funny and energetic. She also did the set decoration which was quite lovely. Sarah Scouten as Mitzi was credible as a hot-tempered Russian maid. Heather Evens as Phillipa Haymes was persuasive as another woman of mystery with skeletons in the closet. Caitlin Clugston was superb as Mrs. Swettenham. Her pacing was quite good. Her son Edmund played by Nathanael Vass got a few laughs from the audience from his snotty English accent. Last but not least was Blaine Nicholas Anderson who played two roles, Rudi Scherz and Chief Inspector Craddock. As Craddock, he was superb. His lines were well-delivered and well-enunciated.

Congratulations to the cast and crew for a well-rehearsed production. For Agatha Christie fans, and for lovers of murder mysteries, this play is a must-see.