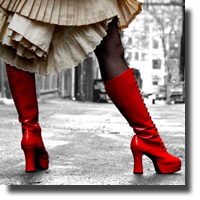 What makes this production different from other conventional proscenium staging of Shaw plays is its multiple staging. Just as in medieval times when religious plays were produced, especially the Via Crucis, the audience would move from one station of the cross to another and even participate in the play, shouting "Crucify Him!" and so forth and so on.

It is something different, but not necessarily new, as this type of staging started in medieval times. The only two peeves I have is sitting down on stage. I was at the stage right area and I could clearly hear the dialogues when the actors were facing this part of the stage. However, the actors who were facing stage left and speaking were inaudible from our angle. In fact, there were instances when the audience on stage left would laugh, while we on the right didn't get the joke because we couldn't hear. What I suggest is when there is a juicy punch line, have the actors face most of the audience so we can benefit Shaw's witty lines.

The other peeve is having to climb up three stories for the last scene. It's easy for the young ones, bu that makes it tough for seniors, or the disabled. There was a man with a cane and had to make his way up slowly. This is an old theatre and it doesn't have elevators the way new ones now do.

All in all, the actors were quite good. I like the clarity in which Rick Tae (Praed). spoke his lines. I also liked the volume and energy of Eric Keenleyside (Crofts). Linda Quibell (Mrs Warren) was inconsistent with her energy and projection. At times, she would slow down and mumble, but most of the time, however, she would deliver superbly. Melissa Oei (Vivie Warren) did her part well, and conveyed Shaw's lines with near perfection. However, in the dialogue between her and Crofts, she had most of her lines with her back to those seated at stage right. Perhaps she should turn 45 degrees to the left when she delivers some important lines.

The Gardiner father (Tom Pickett) and his son (Daniel Arnold)--why is the father black and his son blonde and white? Was this a miscast? Or should we assume that the mother is white and the son takes after her genes. But actingwise, both actors delivered their parts well.

Kudos to Alley Theatre for a somewhat different kind of production. It was good to see a Shaw production done differently.