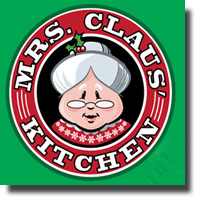 Bake a magic cookie and Manhattan will beat a path to your door. Paraphrasing this well-worn business aphorism may have been what kicked off Bill Allman, Alan Marriot and Kevin O’Brien’s idea for a Christmas musical revue. Or, perhaps they just wanted to give Santa’s “Missis” some overdue recognition. Either way Mrs. Claus Kitchen turns out to be quite a romp with something for just about everyone.

The show has a distinct pantomime feel with a light touch of a redemption tale. If it comes off looking like improv, it’s probably because of the participation of show co-creator Alan Marriot and seasoned TheatreSports performers, Elizabeth Bowen and Ellen Kennedy. Marriot, who is the only cast member to play multiple roles, can be seen in his weekly improv gig, Friday Night Live at Lynn Valley United Church for a mere ten dollar donation.

As with many seasonal shows, the premise to Mrs. Claus Kitchen is uncomplicated. Mrs. Claus (Elizabeth Bowen) bakes cookies that not only taste good, but have a magic ingredient that causes the ‘muncher’ to recall happy childhood memories of Christmas. When she turns over the recipe and world-wide distribution to Megabake CEO, Jonathan Brooks (Michael Robinson), the cookies sell well thanks to slick marketing, but lack the essential ingredient – heart.

The simple, but spirited choreography has Vancouver native Jeff Hyslop’s signature all over it. It’s hard to imagine that we first saw Hyslop forty years ago as an apostle in the film version of Jesus Christ Superstar. Today, he is still best known for his many stage performances as the Phantom of the Opera.

The show offers a cluster of catchy songs that the entire cast gets an opportunity to sing with varying degrees of confidence. Ellen Kennedy, who looks far too young to be cast as an octogenarian, shows off her experience with a poignant rendition of “That’s When I Feel Old.”

The cast appears to have as much fun as the audience. In particular, Caleb di Pomponio and Brian Sutton as Mrs’ Claus’ pointy-eared ‘personal assistants’ Robin and Ruprecht almost steal the show with their frivolous physical comedy.

Though never intending to be preachy, this charming little piece of musical theatre offers a simple message. Who doesn’t want to escape reality for awhile when fantasy is this much fun?